After winning the clash with Real Betis, Sevilla climbed to third position in the points table, making their way for Champions League. They will want themselves to be seen in top 4 when they meet Levante on Monday night.
Levante also started their campaign on a high note as they restricted higher ranked Valencia on a 1-1 draw on Friday’s night. Although they have shown great performances against top sides, winning against quality teams like Barcelona, Real Madrid earlier this season. They have managed to score against higher ranked sides at their home this season.
Levante will be hoping to continue this form on Monday, having scored in seven of their eight home games before the season was stopped due pandemic. On the other hand Sevilla has kept clean sheet in just one away game out of their last 4 away games. But we shouldn’t forget the fact that Sevilla is one the most impressive side when it comes to away games as they have found net in 93% of the games they have played away from their home.
If we look at points table of this season in terms of away game wins, Sevilla are placed second with 7 victories to their name. They are best away side this season so we can expect them to take points from here.
Match Details
Venue – Estadio Ciudad de Valencia, Spain
Date – 15 June 2020
Timings – 11:00 PM ( IST )
Referee – Alejandro Hernandez
League – La Liga ( Round 29 )
Recent Form ( In last 5 Matches )
Levante – L W L D D
Sevilla – W D W D W
Levante Vs Sevilla Head to Head Record
In last 18 head to head games, Levante has won on four occasions while Sevilla emerged as better side with 8 wins. 6 games resulted in a draw.
Team News
👉 Ivan Lopez is expected to join Lavante’s training camp in late August 2020.
👉 José Campãna is doubtful for this match.
👉 Roger Marti is suspended for this clash.
Probable Lineup For Levante
( 4-4-2 )
Aitar ; Jorge Miramon, Ruben Vezo, Sergio Postigo, Carlos Clerc ; Rubén Rochina, Nikola Vukcevic, Gonzalo Merelo, Enis Bardhi ; José Louis Morales, Borja Mayoral.
Probable Lineup For Sevilla
( 4-3-3 )
Tomas Vaclik ; Sergio Reguilon, Diego Carlos, Jules Koundé, Jesus Navas ; Joan Jordán, Fernando, Éver Banega ; Lucas Ocampos, Youssef En- Nesyri, Suso.
Key Players For Dream11 Prediction
1. Lucas Ocampos – The Argentine winger has played 23 matches this season so far. He has scored 11 goals and assisted thrice. He has had total of 25 shots on target so far this season.
2. Rubén Rochina – 29 years old Spanish mid fielder has featured in 20 matches this season for Levante. He has scored three goals for his team and assisted once.
3. Ruben Vezo – Vezo has been crucial at centre back for Levante. He has played 20 matches so far, having spent a total of 1800 minutes on the field. He has 16 successful tackles, 101 clearances, 28 interceptions to his name.
4. Éver Banega – 31 years old Central midfielder adds a favour of experience in Sevilla’s midefield. In 24 matches this season, he has scored 2 goals and assisted 6 times, having spent 1876 minutes on the field for his team and has been named Player of the match 4 times.
Levante Vs Sevilla Match Facts
👉 Sevilla has won previous four matches against Levante.
👉 Levante has lost their last 3 La Liga games against Sevilla.
👉 Levante are unbeaten in their last three home games.
👉 Sevilla have lost two of their last 9 away games in La Liga so far.
👉 Sergio León has scored in two of his last three games that he played against Sevilla.
Levante Vs Sevilla Odds Comparison Case Study
Levante are currently places at 5.25. If we calculate winning percentage of Levante with these odds then it comes out to be 19.04 percent. But recent study shows that when a team is placed with these odds then it actually wins 12 percent of its matches.
Sevilla are currently placed at 1.60. If we calculate winning percentage of Sevilla with these odds then it comes out to be 62.5 percent. But recent study shows that when a team is placed with these odds then it actually wins 49 percent of its matches.
Levante Vs Sevilla Dream11 Team 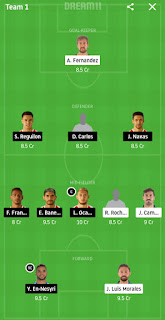