12 Consecutive Wins In T20 International – A Record By Afghanistan

If we ask you a question – Which team has 12 consecutive wins in T20 International history then what will be your answer. Obviously the name that will come in our mind may be India, because of its dominance in international cricket in the recent years. Some may think about Australia, as kangaroos have had a strong influence in cricket history.

But the names that are striking  your mind is not the answer of our question. Yes, you might be surprised and won’t even believe that a team that has won 12 consecutive T20 International games is neither India nor Australia. It is a team that is newly built but has given some remarkable players in recent cricket.
Now it’s time to reveal the answer and the answer is Afghanistan. We know you are surprised by knowing it but the fact is, it is team Afghanistan that has won 12 consecutive games in T20 International. It’s extremely hard to believe that a team who doesn’t even have it’s home ground on its land has made such a remarkable record in cricket history. 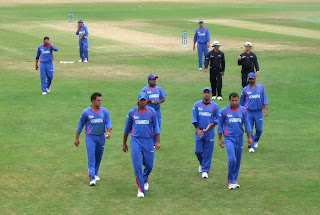 As a nation they may be surrounded by several problems but when it comes to cricket, they have certainly highlighted,  what actually this team is capable of. Not going too far but no cricket fan can forget World Cup 2019 game, they played against India. Every Indian cricket fan was hoping that their team will beat Afghanistan one sidedly.
But things are always not in accordance to what cricket fans feel like. India could only manage 224-8 in 50 overs which was extremely surprising. Star studded Indian batting lineup performed below expectations and once it appeared that Afghanistan will make biggest upset in the World Cup 2019. But experienced Indian bowlers saved the hopes of Indian fans.
Afghanistan cricket team home ground 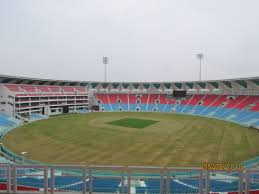 Due to nation’s internal worries, Afghanistan cricket team has preferred playing cricket out from the country. They started playing at Sharjah, due to the conflicts between two cricket boards, they shifted their home ground to India. They first played Noida Cricket Ground. It was back in August 2019, when Ekana Stadium ( now referred as Bharat Ratna Shri Atal Bihari Vajpayee Ekana Cricket Stadium ) was adopted as their home ground in India and the first match they played at their adopted home ground was against West Indies.
If this is such a great side then you might want to know, what has made Afghanistan Cricket Team so balanced ? Let’s figure it out.
Who is the best player in Afghanistan cricket team ?
If this side can bring matches so close near to win against sides like India, then there are certainly quality players in this team as well. We will discuss about the best. It’s really hard to figure out the best but if we pick the best, it’s none other than Rashid Khan and Mohammad Nabi.
Rashid Khan is arguable one of the best leggie when it comes to shorter format of the game. He has been part of IPL Franchise – Sunrisers Hyderabad since 2017. He has the capability to pick up wickets at regular intervals and he is very handy batsman down the order. He can hit the ball really hard for maximum, overall he is a smart cricketer and his all round capabilities makes him really special.
Apart from IPL, Rashid is also an integral part of Big Bash. He was acquired by Adelaide Strikers in 2017. Apart from this he has also played for Quetta Gladiators in 2018.
Another best player from Afghanistan cricket team who comes in our list is Mohammad Nabi. 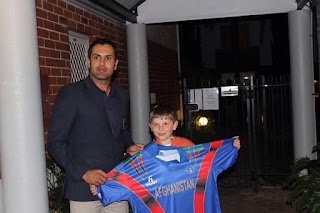 Just like his teammate Rashid, Nabi was acquired by Sunrisers Hyderabad in the same year. Nabi was incredibly effective with the ball as he had an economy rate of 5.5 in the very first season that he played for SRH.
He donot rely on the turn, rather he focuses on line and length of the ball. He usually bats at no.6 and can score runs quickly. In the same year he became the part of BBL, signing a contract with Melbourne Renegades.
Now let us look at those 12 consecutive wins in T20 cricket of Afghanistan side that they registered between the time period of 5 February 2018 to 15 September 2019. 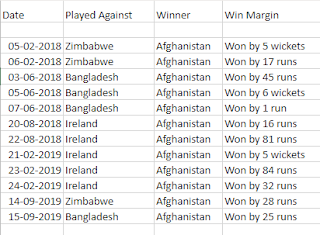