Real Madrid will host Valencia on Thursday evening at Estadio Alfredo Di Stefano and will be aiming to put pressure on La Liga giants Barcelona as they enjoy great home record. On the other hand Valencia are looking for their first win after the league resumption. Real Madrid started their campaign with a 3-1 win over Eibar whereas Valencia were held on a dramatic draw against Levante.
They enjoy great home record with 14 wins and Zidane will be encouraged by the fact that their upcoming fixtures are against relegation threatened sides like Mallorca and Espanyol. Winning games like these could make a difference in title hunt or runner up. On the other hand Valencia were left disappointed against Levante when their lead was cancelled by Gonzalo Merelo’s penalty before the 8 minutes of stoppage time.
Europa league qualification along with Champions League qualifications still seems to be realistic target for The Bats. They are just four points behind from Europa league qualification and will be aiming to seal that spot. But this doesn’t seems as easy. They are the only side in table top half with negative goal difference which means they need to work upon their scoring frequency as well.
Match Details
Venue – Estadio Alfredo Di Stefano
Date – 19 June 2020
Timings – 1:30 AM ( IST )
League – La Liga ( Round 29 )
Referee – Jose Sanchez
Team News
Real Madrid
– Lucas Vazquez is expected to recover from his muscle injury by early July 2020.
– Like Jovic is struggling with calf injury and is expected to be full fit by early July 2020.
– Mariano Diaz is doubtful for this match.
– Nacho Fernandez is expected to join the team by late June 2020.
Valencia
– Gabriel Paulista is doubtful for this match.
– Cristiano Piccini is expected to be fit by early July 2020.
– Ezequiel Garay is struggling with cruciate ligament injury and is expected to be fit by early August 2020.
– Gaya is doubtful for this match.
Recent Form Of Both Teams
Real Madrid – L L W L W
Valencia – L W D L D
Probable Lineup For Real Madrid
( 4-4-2 )
Thibaut Courtois ; Daniel Carvajal, Raphael Varane, Sergio Ramos, Ferland Mendy ; Toni Kroos, Casemiro, Federico Valverde, Isco ; Karim Benzema, Eden Hazard.
Probable Lineup For Valencia
( 4-4-2 )
Jasper Cillessen ; Jaume Costa, Hugo Guillamon, Francis Coquelin, Daniel Wass ; Carlos Soler, Daniel Parejo, Geoffrey Kondogbia, Ferran Torres ; Maximiliano Gomez, Rodrigo.
Key Players For Dream11 Prediction
1. Karim Benzema – 32 years old French forward has lot of experience under his belt. He has played 27 matches so far where he ended up scoring 14 goals along with 6 assists.
2. Rodrigo – The Spanish centre forward has featured in 22 matches for Valencia so far this season where he scored 3 goals with 7 assists adding to his name.
3. Toni Kroos – Dynamic central midfielder who has scored 4 goals along with 5 assists in 25 matches that he has played for Madrid so far this season.
4. Daniel Parejo – Another great Spanish centre midfielder who has played 26 matches for Valencia so far where he ended up scoring 8 goals along with 3 assists.
Real Madrid Vs Valencia Match Facts
👉 Real Madrid have only lost one game out of their last 7 games played in all competitions against Valencia.
👉 Real Madrid are unbeaten in their last 11 home games in La Liga against Valencia ( Won 6 Drawn 5 ).
👉 Valencia have lost 87 La Liga games against Real Madrid, most against any side in La Liga.
👉 Valencia haven’t won any away game in their last 5 away La Liga games.
👉 Real Madrid have only considered 20 goals in La Liga 2019-20.
Who should be Captain in Real Madrid Vs Valencia Dream11 today?
When it comes to choose captain and vice captain, majority of the fantasy players goes with the percentage. But that’s not always a correct way to choose captain and vice captain. We have analysed Bet365 odds and the best Picks for this match as Captain and Vice captain can be
1. Karim Benzema
2. Isco ( IF PLAYS )
3. Sergio Ramos
4. Maximiliano Gomez
Players you can avoid in Grand Leagues
1. Toni Kroos
2. Casemiro
3. Rodrigo
4. Daniel Parejo
Real Madrid Vs Valencia Odds Comparison Case Study
Real Madrid are currently placed at 1.36. If we calculate the winning percentage of Real Madrid with these odds then it comes out to be 73.52 percent.
On the other hand Valencia are currently placed at 8.00. If we calculate the winning percentage of Valencia with these odds then it comes out to be 12.50 percent.
Real Madrid Vs Valencia Grand League Dream11 Team 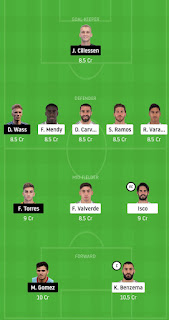 Disclaimer – We have created this team based on our instincts and analysis. Make necessary changes in your final Dream11 team once the lineup is announced. Read our preview and try to make your own Dream11 team.