Eintracht Frankfurt will host Schalke 04 on Wednesday at Commerzbank Arena. There is not the much difference when it comes to points table ranking as only one point is differentiating the both. Schalke 04 are placed on 9th position with 39 points while Eintracht Frankfurt are placed on 10th with 38 points in 31 matches. Both the teams have no chance for Europa league qualification so the duo will be eager to finish in top half of the table.
Both the teams have not enjoyed much success this season and will be hoping to finish off the tournament on a higher note. The Royal Blues have earned only two points since the restart of the league and are winless in their 13 league matches so far. Although they managed a draw with Bayer Leverkusen but it will be better to call a good luck as they only managed 33 percent of the ball possession in that game.
Things were looking on track when Schalke was receiving the services of their star players like Suat Serder and Amine Harit but since their injury, Schalke 04 are looking ineffective. Schalke 04 have failed to score in 7 of their 15 away games this season so far in Bundesliga. On the other hand Eintracht Frankfurt have enjoyed success in their recent games over sides like Wolfsburg, Werder Bremen and Hertha Berlin.
Match Details
Venue – Commerzbank Arena
Date – 17 June 2020
Timings – 10:00 PM ( IST )
League – Bundesliga ( Round 32 )
Where To Watch
Hotstar VIP
Star Sports Select 2
Star Sports Select HD2
Team News
– Gelson Fernandes is expected to join. Eintracht Frankfurt’s training camp in late July 2020.
– Amine Harit is expected to join the training in July 2020.
– Benito Raman is doubtful for this match.
– Benjamin Stambouli is also doubtful for this match.
– Guido Burgstaller is expected to join Schalke 04 training camp in early August 2020.
– Jean-Clair Todibo is out due to ankle injury for a few weeks.
– Matija Nastasic is out due to muscle injury for few weeks.
– Omar Mascarell is out for a season with groin injury.
– Rabbi Matondo is expected to recover from his groin injury by late June 2020.
– Salif Sané is also expected to join the team by late June 2020.
– Daniel Caliguiri is suspended for this match.
Recent Form Of Both Teams
Eintracht Frankfurt – W W L L W
Schalke 04 – L L L D D
Probable Lineup For Eintracht Frankfurt
( 3-4-1-2 )
Kevin Trapp ; David Abraham, Martin Hinteregger, Evan N’Dicka ; Danny da Costa, Dominik Kohr, Sebastian Rode, Filip Kostic ; Daichi Kamada ; Bas Dost, André Silva.
Probable Lineup For Schalke 04
( 4-4-2 )
Alexander Nübel ; Juan Miranda, Ozan Kabak, Bastian Oczipka, Jonjoe Kenny ; Can Bozdogan, Weston McKennie, Alessandro Schöpf, Nassim Boujellab ; Michael Gregoritsch, Ahmed Kutucu.
Key Players For Dream11 Prediction
1. Bas Dost – 31 years old forward will play a huge role for Eintracht Frankfurt in this game. He has played 21 matches so far where he ended up scoring 6 goals along with 2 assists.
2. Filip Kostic – Kostic is having good season so far as he has played 30 matches for Eintracht Frankfurt so far where ended up scoring on 4 occasions and assisted 10 times with 610 accurate passes so far to his name in this tournament. He has also emerged out Player of the match 6 times so far.
3. Martin Hinteregger – 27 years old centre back has played 28 matches so far. He has 8 goals and an assist to his name with 48 successful tackles, 80 clearances, 30 interceptions.
Eintracht Frankfurt Vs Schalke 04 Match Facts
👉 Schalke 04 haven’t won a match in 12 attempts.
👉 Eintracht Frankfurt have won 25 Bundesliga home games against Schalke 04.
👉 In their last 8 away Bundesliga games at Frankfurt, Schalke 04 are winless.
👉 Eintracht Frankfurt have won three of their last 4 Bundesliga games.
Eintracht Frankfurt Vs Schalke 04 Odds Comparison
Eintracht Frankfurt are currently placed at 1.72. If we calculate winning percentage of Frankfurt with these odds then it comes out to be 58.13 percent. But recent studies shows that when a team is placed with these odds then it actually wins 63 percent of its matches.
On the other hand Schalke 04 are currently placed at 4.50. If we calculate the winning percentage of Schalke 04 with these odds then it comes out to be 22.22 percent. But recent studies shows that a team with these odds actually wins only 1 percent of its matches.
Eintracht Frankfurt Vs Schalke Match Winner Prediction
Although Schalke haven’t won a game in their last 12 meetings but our analysis shows that this game can result in a draw.
Eintracht Frankfurt Vs Schalke 04 Dream11 Team 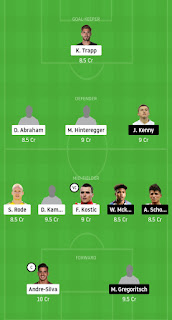