Barcelona faces real test when they will meet Sevilla at Estadio Ramon Sanchez Pizjuan on Friday night. With no crowd in the stadium, Catalans will be hoping to dominate this game but this won’t be as easy for them when they enter in Sevilla’s den.
Sevilla started their campaign on a higher note since the league resumption. They crushed Betis in Derby by 2-0 but was disappointed when they had to share the points with Levante after a dramatic draw.
FC Barcelona have won their last three consecutive matches but this doesn’t seem as easier as it was against Mallorca, Leganes. Sevilla are currently ranked third in the points table with 51 points in 29 matches. Quique Setien have made changes, probably he was saving energy for this fixture. But surprisingly Messi has played for all 180 minutes where he ended up scoring goals along with creating scoring chances for his team.
It will be pretty interesting to see how Setien will build team’s lineup for this clash. Antoine Griezmann has failed to impress in either matches since the league’s resumption and may find his spot under threat to Martin Braithwaite who didn’t featured against Leganes. Apart from this it will be pretty interesting to see whether Setien will hand over Suarez, the starting spot or not.
Match Details
Venue – Estadio Ramon Sanchez Pizjuan
Date – 20 June 2020
Timings – 1:30 AM ( IST )
League – La Liga ( Round 30 )
Referee – Jose Luis Gonzalez
Team News
– Samuel Umtiti is suspended for this match.
– Ousmame Dembele is expected to be fir by early August 2020 from his thigh injury.
Recent Form Of Both Teams
Barcelona – D L W W W
Sevilla – D W D W D
Probable Lineup For Barcelona
( 4-3-3 )
Marc Andre ter Stegan ; Jordi Alba, Clement Lenglet, Gerard Pique, Nelson Semedo ; Frenkie de Jong, Sergio Busquets, Arturo Vidal ; Antoine Griezmann, Luis Suarez, Lionel Messi.
Probable Lineup For Sevilla
( 4-3-3 )
Tomas Vaclik ; Jesus Navas, Jules Koundé, Diego Carlos, Sergio Reguilon ; Joan Jordán, Nemanja Gudelj, Ever Banega ; Munir El Haddadi, Luuk de Jong, Lucas Ocampos.
Barcelona Vs Sevilla Key Players For Dream11 Prediction
1. Lionel Messi – 32 years old Argentine star needs no introduction. He has featured in 24 matches so far this season where he ended up scoring 21 goals along with 14 assists. He will definitely be a must pick when it comes to select your dream 11 fantasy team.
2. Lucas Ocampos – 25 years old Argentine winger has played 24 matches so far for his team where he ended up scoring 11 goals along with 3 assists to his name.
3. Ever Banega – The central midfielder for Sevilla has played 25 matches so far this season. He has scored 2 goals with 6 assists so far.
4. Sergio Busquets – 31 years old Spanish central midfielder has played 25 matches for Barcelona so far this season where he ended up scoring 2 goals and assisted the same.
Barcelona Vs Sevilla Match Facts
👉 Barcelona have won last 3 matches against Sevilla.
👉 Sevilla have lost seven of their last 8 games against Barcelona in La Liga, playing a draw on lonely occasion. There last win came against Barcelona back in 2015.
👉 Sevilla’s biggest home win in La Liga was against Barcelona when they crushed Barcelona by 11-1 back in 1940.
👉 Lionel Messi has scored 699 first team goals in all competitions for club and country, scoring 629 for Barcelona and 70 for Argentina.
👉 Quique Setien has lost four of his seven La Liga games as Barcelona manager.
Who Should Be Captain In Barcelona Vs Sevilla Dream11 Today?
After analysing Bet365 odds we concluded that best choice for Captain in this match will be
1. Lionel Messi
2. Munir El Haddadi
Big Players To Avoid In Grand League
As per Bet365 odds we have analysed and prepared the list of big names which you can avoid in Grand Leagues and the names are
1. Lucas Ocampos
2. Arturo Vidal
Barcelona Vs Sevilla Odds Comparison Case Study.
Barcelona are currently placed at 1.97. If we calculate winning percentage of Barcelona with these odds then it comes out to be 50.76 percent.
On the other hand Sevilla are currently placed at 4.10. If we calculate winning percentage of Sevilla with these odds then it comes to be 24.39 percent.
Barcelona Vs Sevilla Grand Dream11 Team 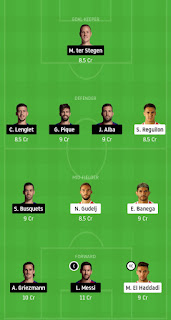