In the 8th match of IPL 2020, Sunrisers Hyderabad will lock their horns against Kolkata Knight Riders. It will be second game of the season for both the teams and the duo are coming into this game after facing a defeat in their opening matches. KKR lost to Mumbai Indians by a huge margin of 49 runs whereas Sunrisers Hyderabad lost to Royal Challengers Bangalore by 10 runs.

Being one the most fancied teams of IPL, fans of Kolkata would be disappointed to see how their beloved team went down against Mumbai despite having one the best middle order which comprise of renowned power hitters.

There were lot of players who were surprisingly included in playing eleven. Inclusion of Sandeep Warrier, Nikhil Naik made everyone surprised. There were better players who could have been included in final lineup. Prasidh Krishna is a way better bowler than Warrier but couldn’t find a place in starting lineup in the first match of the season.

Before start of the season, KKR’s middle order gained headlines which include players like Nitish Rana, Eoin Morgan, Dinesh Karthik, Andre Russel. But none among these renowned players could perform as per their reputation which resulted in team’s heavy defeat.

However there are several other concerns as well.

Sunil Narine is considered as one of the most valuable player in T20 cricket due to his ability to hit the ball over boundary ropes as well as he bowls during crucial situation in match. But his weakness against short pitch deliveries got exposed in the last game. He might continue to struggle against short pitch deliveries taking the nature of pitches in UAE into consideration.

Apart from this biggest weakness of Kolkata lies in bowling department. They have costliest bowler of this season in their team i.e. Pat Cummins, but Cummins couldn’t justify his price tag in the first match against Mumbai and leaked lot of runs. Even in spin department, Kuldeep Yadav looked out of touch and went on to concede lot of runs without taking a single wicket.

If KKR wants to qualify for the play off, the team needs to overcome its weaknesses as soon as possible.

Middle order of Hyderabad was relatively weaker. Priyam Garg, Vijay Shankar, Abhishek Sharma are inexperienced middle order batsmen and SRH must look to accommodate Williamson and Nabi in their playing eleven in order to boost their middle order.

If we compare bowling attack of Hyderabad with Kolkata then it’s far better than KKR. SRH have bowlers like Bhuvneshwar Kumar, Rashid Khan who are renowned T20 specialist bowlers. Apart from this Sandeep Sharma, T Natarajan were not as expensive as that of KKR’s local fast bowlers.

We can conclude that the team which will overcome their faults of playing eleven is expected to dominate this game. With both sides packed with renowned players, it is expected to another cracking game in initial weeks of IPL 2020.

The conditions would be hot and humid in Abu Dhabi on match day with no chances of rain along with clear skies.

The surface at Sheikh Zayed Stadium has been pretty good for batting so far. There was good amount of pace as we have seen in last match. Decent amount of grass has been left of the pitch in order to help the ball come on to bat nicely. Anything over 175 will be difficult to chase on surface like this.

Recent match in IPL 2020 have been won by batting first side but still the sides are choosing to bowl first after winning the toss. It is because of dew which plays its part in second half of the game. It become difficult for the bowlers to grip the ball and hence side that will win the toss is expected to field first. 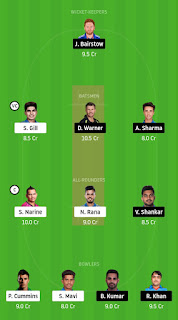