In the last 5 matches between Rajasthan Royals and Kolkata Knight Riders, KKR have won on four occasions

12th game of IPL 2020 would be exciting as one of the most underrated team of the tournament i.e. Rajasthan Royals will take on two times champions Kolkata Knight Riders. Both the teams would be high on confidence after winning their previous matches.

Rajasthan Royals gained headlines after recording highest run chase in IPL history against Kings XI Punjab in their last match. In their opening game, Royals stunned Chennai Super Kings which was again a biggest upset in first week of IPL 2020. They have been one of the most exciting team this season to watch out for so far. In just two matches, Rajasthan Royals have managed to hit 35 sixes which is certainly entertaining TV viewers.

However this will be the first game that Rajasthan Royals will play away from Sharjah and it will be pretty interesting to see how this team performs away from Sharjah. Their victory against Kings XI Punjab is going to remain in the minds of cricket fans for a long time as it took extraordinary efforts to pull off victory in that game.

More than Rajasthan’s victory, Rahul Tewatia has been the centre of attraction of each cricket lover after his magical innings of 53 runs that came off just 31 deliveries. Tewatia hit 5 sixes in an over and led his team towards an extraordinary victory.

Main reason behind Rajasthan’s successful campaign so far has been the brilliant performance of Indian players. Although Steve Smith has led his team from the front, Jofra Archer has delivered with bat and ball but the major contribution has come from local talents which include Sanju Samson, Rahul Tewatia.

Their current batting lineup is very heavy which include players like Jos Buttler, Steve Smith, Sanju Samson at top order. The trio have the ability to win matches single handedly on their day. However their bowling is comparatively weaker but it’s not the Rajasthan who is facing this. The kind of pitches that are prepared in UAE, are turning out to be a nightmare especially for bowlers.

On the other hand Kolkata Knight Riders made some smart changes in their playing eleven which turned out in their favour. The inclusion of Kamlesh Nagarkoti and Varun Chakravarthy provided much needed balance to the team. Chakravarthy ended with decent bowling figures of 4-0-25-1. On the other hand Pat Cummins made a strong come back in second game and ended with bowling figures of 4-0-19-1. However poor form of Kuldeep Yadav still remains their biggest headache.

Kolkata do managed to win their previous game but their batting was still an average. Sunil Narine is clearly struggling at the top while skipper Dinesh Karthik is also not looking in great touch. Shubman Gill played sensible innings in last match while in form Eoin Morgan, Nitish Rana will need to score big in case Kolkata is asked to bat first. Andre Russel hasn’t got much chance to bat.

Kolkata Knight Riders are not too far in our opinion from Rajasthan Royals which could lead to another exciting contest between both the sides.

Skies over Dubai would be clear on match day and every cricket lover should expect a game without any sort of interruption.

Dubai International Cricket Stadium has been serving up some slow pitches that are not beginning to take turn. Scores of over 180  are not going to be an easy chase for side batting second. On an average sixes have been hit every 30 balls which shows batting will not be easy as it was at Sharjah.

So far four matches have been played on this ground in ongoing season of IPL and all the four matches have gone in favor of teams batting first. Dew plays its part in second innings of the game but it hasn’t had much impact on the game result. Team that win the toss should opt to bat first. 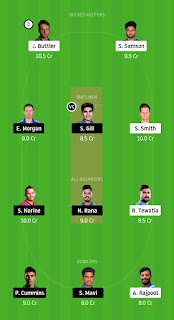