Indian Premier League (IPL 2020) is considered as the biggest T20 league across the world and we have already seen some exciting and thrilling contest in the very first week of the tournament. Chennai Super Kings won the their opening match against Mumbai Indians but lost their second game against the most unglamorous team of this IPL i.e. Rajasthan Royals. They will play their third straight match this week against Delhi Capitals. After having won first game in super over, Capitals would be high on confidence.

Chennai Super Kings may be called as an Old Army in IPL but the kind of experience they have in batting and bowling department is way better than rest of the teams. They are expert of adapting to the situations and changing their strategy on the go.

Chennai Super Kings started with plenty of questions at the beginning of this tournament when it was clear that players like Suresh Raina and Harbhajan Singh will not be the part of team. With Raina not available at number three, Faf du Plessis grabbed the opportunity to bat on same position with both hands and performed brilliantly with the bat in both the matches. He has scored two half centuries in two games that he has played so far.

In the absence of Dwayne Bravo, young English all rounder Sam Curran got the chance to play for Super Kings and his performance as an all rounder has been pretty consistent in both the matches.

In their last game against Rajasthan Royals, Super King’s bowling lineup faced lot of criticism as their key bowlers including Piyush Chawla, Lungi Ngidi leaked lot of runs. Ngidi ended with poor bowling figures of 4-0-56-1, whereas Chawla ended with 4-0-55-1. The duo leaked over 100 runs together which led them to defeat against Rajasthan.

It’s not only their bowling but the opening pair of Murali Vijay and Shane Watson haven’t contributed as well. CSK is dependent over Faf du Plessis, Ambati Rayudu for scoring runs while none other batsmen have shown glimpse of staying at the crease. If Bravo is fit, he might be included in the team in place of Lungi Ngidi as South African speedster is looking out of touch.

On the other Delhi’s top order collapsed at 13/3 against Kings XI Punjab in their first before skipper Shreyas Iyer and Rishabh Pant managed to handle the situation. The duo scored 39, 31 runs respectively and at one stage Delhi was 96/6. This year Delhi bought Marcus Stoinis in the auction and the Australian all rounder proved his worth by leading his team to a competitive total of 157 runs at the end of 20 overs.

While defending a total of 157, Delhi bowlers reduced opposition to 34/4 with wickets from Rabada, Ashwin, and Mohit Sharma. Ashwin could only bowl one over before getting injured but in that one over spell he took the wickets of Karun Nair and Nicholas Pooran. Rest of his three overs were completed by Marcus Stoinis. After shining with the bat, Stoinis ended with bowling figures of 3-0-29-2.

His all round performance earned him Player Of The Match reward. Except Mohit Sharma all other bowlers were economical with the ball. They way Delhi won the game in super over, it has certainly warned other teams not to take them lightly.

We all know that Dubai is known for its hit and humid weather and the same weather conditions are expected to be on match day.

Surface is expected to be on a slower side and spinners will have big impact in the game as compared to fast bowlers. Dew will play it’s part in the second innings. Team batting first should be happy if they manage to cross 165 run mark on this surface.

Best Choice For Captain & Vice Captain Will Be –

On the other hand Delhi Capitals is placed at 2.00. If we calculate the winning percentage of Delhi Capitals at these odds then it comes out to be 50.00 percent. 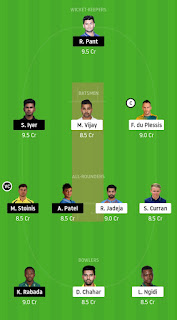