In the 6th match of IPL 2020 Kings XI Punjab will lock their horns against Royal Challengers Bangalore. Kings XI Punjab would consider themselves unlucky after having lost to Delhi Capitals in their first match due to umpiring error and their inability to hold on the nerves in a close game that was decided in super over. On the other hand Royal Challengers Bangalore enter into this game with a superb over Sunrisers Hyderabad which will surely lift their confidence.

Kings XI Punjab have not won against Royal Challengers Bangalore in the last two seasons which will add mental pressure to their side. RCB would be happy about their bowler’s performance which is considered to be their weak point.

Leading Punjab for the first time, KL Rahul and his company messed up in the final over of the game which resulted in a tie and ended up suffering a defeat which could have been a easy win. However umpiring error also led to their defeat but KL Rahul will look forward for a better show from his side against Bangalore.

It was Punjab’s batting that collapsed badly in their opening game. Universal boss Chris Gayle did not feature in last game but the team should include him to pair up with skipper KL Rahul for the opening. Mayank Agarwal was brilliant and was lone warrior for his team in batting department. Karun Nair, Glenn Maxwell, Nicolas Pooran were poor with the bat and the trio must play with responsibility in order to ensure team’s win.

Mohammad Shami and Sheldon Cottrell did well in last game and their team will want them to replicate their performance against side like Bangalore which is packed with renowned hitters. Krishnappa Gowtham looked ordinary and Ravi Bishnoi will have to do well in middle overs of the game. Maxwell will have to play with more responsibility in batting and bowling department.

On the other hand Virat Kohli would be very impressed, the way his team bounced back against Sunrisers Hyderabad. They managed to beat Hyderabad by 10 runs and the credit goes to their bowlers who bowled brilliantly in middle overs of the game. Kohli will want his side to carry the same momentum in upcoming games as well.

In the bowling department, Yuzvendra Chahal was star performer who picked up three crucial wickets without letting batsmen to free their arms against his leg spin. Navdeep Saini and Shivam Dube also bowled well and the duo picked up 2 wickets each. Umesh Yadav leaked lots of runs during his spell and should bowl with better lengths. Washington Sundar, Dale Steyn will have to bowl better deliveries in middle overs of the game.

There will be bright and sunny conditions in Dubai for the match day. Hot and humid conditions will test the fitness of players, however there are no chances of rain.

The track at Dubai International Cricket Stadium has been on a slower side where the odd ball has surprised the batsmen and hence they will need to be cautious in their shot selection.

Two games have been played on this ground in the tournament so far where one game ended in a tie and the second match was won by batting first. Pitch tends to remain on a slower side and anything over 160 is hard to chase on this ground. So captain winning the toss should opt to bat first and batting first side should try to cross 160 run mark in order to build pressure over their opponent in second half of the game.

Kings XI Punjab is currently placed at 2.10. If we calculate the winning percentage of Kings XI Punjab at these odds then it comes out to be 47.61 percent. 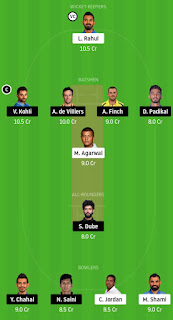