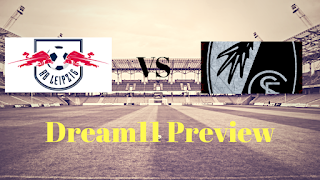 Match Preview
After claiming their Champions League spot for the first time ever in history RB Leipzig will be aiming to clinch another clinical win when they host Freiburg this weekend in Bundesliga. RB Leipzig are just one point behind the second and five points behind the top spot of Bundesliga points table.
Recently RB Leipzig beat Tottenham Hotspur by 3-0 to enter into quarter finals of Champions League. Prior to this , Leipzig played back to back draws so they will be keen to win this to gain some winning momentum. Although this won’t be so easy for them as Freiburg will make their way quite tough since they managed to beat Union Berlin by 3-1 in their last home meeting.
Looking at the recent form of both these two teams Freiburg has won two matches, lost two matches and in the remaining one they managed a draw. Leipzig on the other hand is unbeaten in their last five matches, having won two matches while playing the draw in their remaining matches. They surely got an upper hand over Freiburg this weekend as they host Freiburg at Red Bull Arena which is a worry sign for Freiburg.
When both these two teams met earlier this season Freiburg showed their class and managed a nail biting victory over RB Leipzig after scoring in each of the halves. But now the things will be totally different as this time it will be Leipzig who will enjoy home advantage and the stats shows the same. Leipzig are unbeaten at their home ground in their last 9 matches winning 6 of them and playing draw on three occasions.
Match Details
Venue : Red Bull Arena
Date : 16 May 2020
Recent Form Of RB Leipzig In Bundesliga
D D W W D D
Recent Form Of Freiburg In Bundesliga
L W D L L W
Team News
Before the pandemic outbreak Timo Werner was struggling with thigh injury but now he has fully recovered and will be a part of weekend action .
Ampadu will be out of this match due to back injury while Mamba, Michel, Fridjonsson are doubtful for this match . Upamecano is suspended for this fixture.
For Freiburg Kübler will be out for this match who is carrying a knee injury.
RB Leipzig vs Freiburg Playing11
RB Leipzig : Gulacsi, Mukiele, Klostermann, Halstenberg, Adams, Sabitzer, Laimer, Angelino, Nkunku, Werner, Schick.
Freiburg : Schwolow, Gulde, Koch, Heintz, Schmid, Haberer, Höfler, Gunter, Waldschmidt, Peterson, Höler.
Top Players For Dream11 Fantasy Football
1. Timo Werner : With 21 goals to his name this season for Leipzig , German striker will be key player in fantasy team. His ability to provide assists makes him most vital player with 7 assist for his team this season so far.
So you cannot avoid him from your fantasy team.
2. Christopher Nkunku : The 22 year old French Winger is enjoying his fabulous form this season having provided 14 assists and scoring 4 times for his team. In his last 5 matches he has assisted 5 times and scored a goal in Bundesliga.
3. Nile Peterson : Although there are very less chances that Freiburg will give an upset to Leipzig in their den but if they managed to do so , Peterson will be their key man. With 8 goals and 2 assists Peterson is their highest scorer. Hence he is must pick for your Dream11 team.
4. Nicolas Höfler : With 12 years of experience under his belt will be a vital pick and the numbers shows his class . This season he has already won 275 duels in the midfield. The only goal he scored this season was against Leipzig.
RB Leipzig Vs Freiburg Prediction
Chances of over 2.5 goals in this match is 64% with Bet365 odds favouring the result at 1.33 in favour of RB Leipzig
Best Choice Of Captain and Vice Captain For Dream 11
Captain – Timo Werner
Vice Captain – Christopher Nkunku
RB Leipzig Vs Freiburg Dream11 Team 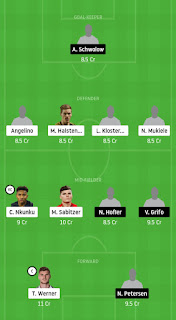 Disclaimer : We have created this team based on our own analysis and insight . Once the lineup is announced do make necessary changes in your Dream11 football team. We advice you not to copy the same team and go with your own instincts after reading the analysis that we have provided above.