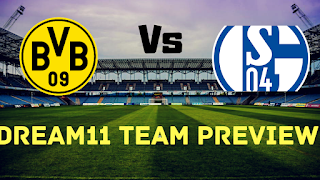 Match Preview
After a long gap of 2 months finally football fans will be happy as there will be lot of action in the soccer world this weekend. Sitting on second spot at the points table, Borussia Dortmund will take on Shalke at Signal Iduna Park.
German Giants are now in do or die situation as they need 3 points from this game to keep their title hopes alive. On the other hand, Schalke who are sitting on 6th position definitely need three points from this game if they want to stay in contention for Europa league spot. Looking at the recent form of both the teams it is clear that German Giants will start as huge favorites in this game.
Borussia Dortmund has won five matches out of of last 6 matches played while they lost one match out of these 6 matches. On the other hand, Schalke are going through poor form as they have lost two matches out of the last 6 matches played, drawing four matches which leaves them winless in their last 6 games. It looks like Dortmund’s European campaign might be over after losing to Paris saint and German but they still have the opportunity to clinch Bundesliga title and become German champion.
When it comes to home games Borussia Dortmund stands out firmly winning their nine games, drawing 3 out of the 12 games played at their home. In those 12 home games they have scored 41 goals and conceded 9. If we talk about Schalke , they have just one win out the last 9 games played . In their  last six games away from home they have not registered even a single win.
Match Details
Venue : Signal Iduna Park
Date : 16 May 2020
Timing : 7:30 PM ( IST )
Key Stats
Key Players
1. Jadon Sancho :  The English International now has 14 goals and 16 assist in Bundesliga 2019-20 , being their premium player . He has most assist this season and overall sitting on second position in terms of assist , just behind Thomas Muller .
2. Achraf Hakimi : The African star has added value to his team with 10 assist and scoring thrice on the occasion. He is definitely a valuable pick when it comes to Dream11 and there is no doubt that you can even try him as Captain ( In Grand League ) or Vice Captain ( In Small League ).
3. Suat Serder : With seven goals under his belt , the 23 year old playmaker is surprisingly Schalke’s top scorer so far so it will be a blunder not to pick him in your Dream11 team .
4. Omar Mascarell : With 74 aerial duels Mascarell has been Schalke’s another premium player just like Serder. Although he got injured before lockdown but the two months gap has made sure that Mascarell will be definitely a part of action this weekend when they meet dangerous Dortmund.
Dortmund vs Schalke Playing11 ( Predicted )
Borussia Dortmund : Ryan Burki, Piszczek ( C ) , Hummel, Akanji, Hakimi, Guerreiro, Brandt, Delany, Sancho, Haaland, Hazard.
Out : Reus, Can, Witsel, Schulz, Zagadou.
Schalke : Markus Schubert, Kenny, Todibo, Nastasic, Oczipka( C ),  Caliguiri, McKennie, Serder, Amine Harit, Burgstaller, Raman.
Out : Stambouli, Kabak.
Dortmund Vs Shalke Match Prediction
With Dortmund dominating home games it is expected that chances of over 2.5 goals is over 62 percent.
Borussia Dortmund vs Schalke Dream11 Tips
Borussia Dortmund vs Schalke Dream11 Team 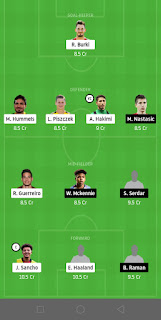 Disclaimer : We have created this dream11 on our analysis. Don’t copy and paste the same plus make necessary changes in your Dream11 team once the lineup is announced.