Cricket returned in unexpected fashion from Covid -19 crisis in the form of 1st Test Match at Southampton. West Indies stunned England on their home soil after clinching sensational win by 4 wickets. Holder and company will look to continue with the same form – aiming at winning a Test series on English soil since 1988.
Joe Root’s return will certainly boost England but he has big responsibility on shoulders i.e. to avoid his side from back to back series defeat against West Indies and also prevent visitors from winning their first Test series in 32 years in England.
Rory Burns and Dominic Sibley are likely to open the innings in the second Test, followed by Joe Root, talented Zak Crawley. The likes of Ben Stokes, Jos Buttler, Sam Curran will add depth in English side. Leaving out bowler like Stuart Broad turned against England and he is likely to make a comeback in second test.
Jason Holder has enjoyed immense success as skipper against England and his numbers in the first Test Match speak the same. His six wicket haul in first innings dragged England on back foot. He was well supported by Shannon Gabriel, who took a total of 9 wickets in entire match.
West Indies are unlikely to make any changes in their winning combination and are expected to go with same lineup in second Test.
Match Details
Venue – Old Trafford Cricket Ground, Manchester, England.
Format – Test Match
Tournament – England Vs West Indies 2020
Date – 16 July 2020
Timings – 3:30 PM ( IST )
Weather Condition – Weather could play hide and seek during the course of five days. Conditions are expected to be cloudy on Day 1 and there would be odd clouds for rest of the days.
Pitch Conditions – Traditionally the wicket is known to be batting friendly where ball comes on to the bat nicely. On Day 1, Day 2, the pitch is known to be at its best for batting, with an average first innings score 333. The pitch offers good assistance to fast bowlers in initial days and later slows down. Spinners love to bowl on the surface on Day 4, Day 5, which offers them bounce and turn.
Venue Details – Old Trafford Cricket Ground is one of the biggest cricket ground in the country with deep boundaries at front, at back and also around the square which means it allows batsmen to take lot of twos and threes.
Toss Strategy – Win The Toss Bat First
Toss will definitely be crucial in this game. In the last 7 matches that have been played at this venue, side batting first has won all the game. No doubt that there is seam and swing on the surface but chasing a score in fourth innings is never easy as the pitch deteriorates. Captain winning the toss should opt to bat first as per our point of view.
Probable Playing 11 England
1. Rory Burns
2. Dominic Sibley
3. Joe Root ( C )
4. Zak Crawley
5. Ben Stokes
6. Jos Buttler ( WK )
7. Sam Curran
8. Dominic Bess
9. Jofra Archer
10. Stuart Broad
11. James Anderson
Probable Playing 11 For West Indies
1. Kraigg Braithwaite
2. John Campbell
3. Shai Hope
4. Shamarah Brooks
5. Roston Chase
6. Jermaine Blackwood
7. Shane Dowrich
8. Jason Holder
9. Alzarri Joseph
10. Kemar Roach
11. Shannon Gabriel
England Vs West Indies Best Picks For Dream11
From England
1. Joe Root
2. Ben Stokes
3. Dominic Sibley
4. James Anderson
5. Stuart Broad ( If Plays Otherwise Pick Jofra Archer )
From West Indies
1. Kraigg Braithwaite
2. Roston Chase
3. Jermain Blackwood
4. Jason Holder
5. Shannon Gabriel
England Vs West Indies 2nd Test Match Facts
👉 West Indies have won two of their last three Tests in England.
👉 England have won only six of their 15 Tests Vs West Indies at Old Trafford ( 4 Draws )
👉 West Indies have not won a Test Match at Old Trafford since 1988 and England have won 8 of their last 10 matches here.
👉 West Indies top order looked vulnerable in the last and will find it hard in seaming conditions at Old Trafford.
England Vs West Indies 2nd Test Match Odds Comparison Case Study
👉 Back Stuart Broad To Be Top England Bowler
Stuart Broad publicly admitted that he was angry, frustrated and gutted after being dropped from first Test. He was England’s highest wicket taker in 2019 Ashes and away series in South Africa at the end of last year.
34 years old has featured in previous 51 home Tests, so it was bit surprising to axe him from last Test.
Having expressed his anger on being dropped from the first Test, Broad will be eager to prove his worth with a sensational firework.
👉 Back Jermaine Blackwood To Be Top West Indies Batsman
Jermaine Blackwood’s 95 run brilliant innings helped West Indian to seal comfortable victory over England in the first Test. His teammate and current captain Jason Holder stated – Jermaine Blackwood batted eloquently, calmly, classy, carefree, after the match.
This is not the first time that Blackwood has gained headlines against England. He was one of the best player in the famous win at Headingly back in 2007.
👉 Back Ben Stokes To Be Man Of The Match
England were bowled out for 204 in first innings of first Test but it was Ben Stokes who top scored with 43. Apart from this grabbed six wickets at Rose Bowl. Hence we back Ben Stokes to be Man of the match at 8.50.
England Vs West Indies Dream11 Team For Small League 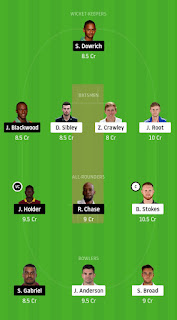