Match Preview
Manchester City will host AFC Bournemouth at Etihad Stadium on Wednesday. Citizens are currently placed at second position with 72 points from 35 matches. On the other hand Bournemouth are placed in relegation zone with 31 points in same number of matches.
Manchester City continued their winning momentum on Saturday at American Express Community Stadium with a 5-0 triumph over Brighton & Hove Albion. It was fourth time in six matches when Manchester City bagged four or more goals.
In Premier League season 2019-20, Manchester City have already scored 91 goals – four short of their last year’s 95 goal mark which led them to title. They still need 15 more goals to match their all time high for most goals in a single league campaign ( 106 goals in 2017-18 season ). With their games coming up sides like Watford, Norwich City, we can expect Citizens to come closer to their own record.
On the other hand Bournemouth stunned Leicester City with 4-1 victory at Vitality Stadium on Sunday. Striker Dominic Solanke strikes twice whereas Junior Stanislas scored through penalty, one goal was gifted to Cherries in the form of own goal by Jonny Evans.
Although Bournemouth have registered wins against top sides since their promotion in 2015 but they have never tasted success against Manchester City. Over the past half decade, Citizens have 100 percent winning record over Bournemouth with an aggregate score of 28-4.
Match Details
Venue – Etihad Stadium
Date – 15 July 2020
Timings – 10:30 PM ( IST )
Tournament – Premier League ( Round 36 )
Referee – Lee Mason
Manchester City Vs Bournemouth Head To Head Record ( In last 9 Premier League games )
In last 9 Premier League games that have been played between these two sides, Manchester City have won all of them.
Recent Form Of Both Teams ( In Last 5 Matches )
Manchester City – W W L W W
Bournemouth – L L L D W
Team News
Manchester City
– Philippe Sandler is a doubtful for this match with a knee injury.
– Sergio Agüero is expected to recover from knee injury by late August 2020.
– Zackary Thomas Steffen is expected to be fit from ligament injury by late July 2020.
Bournemouth
– Adam Smith is a doubtful for this match with a head injury.
– Charlie Daniels is back in training after having recovered from dislocated kneecap.
– Chris Mepham is expected to be fit from knee injury by early August 2020.
– Joshua King will be fit from hamstring injury by late July 2020.
– Nathan Benjamin Aké is expected to recover from groin injury by late July 2020.
– Simon Francis is expected to join the team by late July 2020 as he has not yet fully recovered from knee injury.
Probable Lineup For Manchester City
( 4-3-3 )
Ederson Moraes ; Kyle Walker, John Stones, Nicolas Otamendi, Oleksandr Zinchenko ; Ilkay Gündogan, Fernandinho, David Silva ; Phil Foden, Gabriel Jesus, Raheem Sterling.
Probable Lineup For Bournemouth
( 4-4-2 )
Aaron Ramsdale ; Diego Rico, Lloyd Kelly, Steve Cook, Jack Stacey ; Junior Stanislas, Jefferson Lerma, Philip Billing, David Brooks ; Callum Wilson, Dominic Solanke.
Key Players For Dream11 Fantasy Team Prediction In Small League
1. Gabriel Jesus – 23 years old young Brazilian centre forward has played 31 matches for Manchester City this season where he ended up scoring 12 goals and assisted 7 times.
2. Raheem Sterling – English winger has featured in 30 league games so far where he ended up scoring 17 goals and assisted once.
3. Callum Wilson – 28 years old English centre forward has played 32 Premier League games this season. He has scored 8 goals with zero assist.
4. David Silva – Veteran Spanish mid fielder has lot of experience under his belt. In 25 league matches he has scored 5 goals and assisted 9 times.
Who Should Be Captain In Manchester City Vs Bournemouth Dream11 Today?
Choosing right captain is always a cause of concern for Dream11 fantasy players. But we have eased the task for you. After analysing Bet 365 odds we have selected best choices for captain in this match and those choices are –
1. Gabriel Jesus
2. Raheem Sterling
3. David Silva
Players You Can Avoid In Grand League
You might have noticed that the team which wins grand league has some big players missing. After analysing Bet 365 we have shortlisted some players that may not be part of Dream team and those players are –
1. Callum Wilson
2. Dominic Solanke
Manchester City Vs Bournemouth Match Facts
👉 Manchester City  have won previous 7 games against AFC Bournemouth.
👉 Manchester City have won all nine of heir Premier League games against Bournemouth by an aggregate score of 28-4.
👉 Bournemouth have conceded 28 goals against Manchester City in their nine Premier League meetings.
👉 Manchester City have won their last 5 Premier League home games without conceding a goal.
👉 Bournemouth have won just one of their last 14 away Premier League games ( Drawn 1 Lost 12 ).
Manchester City Vs AFC Bournemouth Odds Comparison Case Study
Manchester City are currently placed at 1.14. If we calculate the winning percentage of Manchester City at these odds then it comes out to be 87.71 percent. But recent studies shows that when a team is placed at these odds then it actually wins 86 percent of its matches.
On the other hand Bournemouth are currently placed at 17.00. If we calculate the winning percentage of the Bournemouth at these odds then it comes out to be 5.88 percent.
Manchester City Vs Bournemouth Dream11 Team For Small League 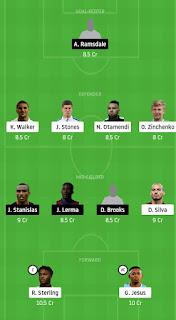