With the hat-trick of defeats, ICCT Smashers will meet Chiayi Swingers in the 13th match of Taipei T10 league on 9th May 2020. The last match played between these two teams resulted in a closed win of Chiayi Swingers with some great performances from Vishwajit S Tanwar , Pruthvi More, Nitish Nair. While Chiayi Swingers completely surrendered infront of PCCT United, the game played on Sunday .
With three straight defeats ICCT Smashers are looking completely out of touch . Chiayi’s captain Saurabh Hajari will be hoping that his side will make a strong comeback against ICCT Smashers and will be hoping to register a comfortable win over them.
Match Details
Venue : Yingfeng Cricket Ground
Date & Timings : 1:30PM ( Local Time )
Pitch Condition
The last few matches played at Yingfeng Cricket Ground has been high scoring matches with first innings score surpassing 90 mark . We can expect the same trend for this match . So the simple strategy will be , team winning the toss will be looking on to bat first with last three matches played on this ground has been won by batting first .
Playing 11 ( Expected )
ICCT Smashers : Vinit Chattrani(WK), Rajesh Mehta, Sandeep Patel, Sanjay Zaveri, Nirav Shah(C), Devang Shah, Shrey Doshi, Mohit Gaur, Dirvesh Jain, Arya Shah, Manoj Loadha.
Chiayi Swingers : Vishwajit S Tanwar, Pruthvi More, Saurabh Hajari(C), Sidhesh Pilankar, Devesh Barshilia, Nitish Nair, Swaraj Shevagan, Rajsingh Chandan(WK), Yogesh Rajput, Deepak Mishra,  Prashant Lokhande.
Recent Form Of Both Teams
Chiayi Swingers : L W L
ICCT Smashers : L L L
Key Players ( Chiayi Swingers )
1. Vishwajit S Tanwar : One cannot avoid Tanwar from his/her fantasy team being the highest run scorer in this tournament so far . He has 96 runs from 3 games under his belt with the best score of 69 runs . He is a regular bowler as well
2. Devesh Barshilia : He has 20 runs and a wicket to his name in this tournament but he can be vital pick in your fantasy team as he opens the innings for his team
Key Players ( ICCT Smashers )
1. Devang Shah : He is their best bowler and second best batsman in this tournament. Shah has 4 wickets with 82 runs to his name in 3 games players so far . This he is the best choice for Captain and Vice Captain in your fantasy team .
2. Dirvesh Jain : He also has 4 wickets in 3 games played so far but Jain has conceded slightly more runs than Shah .
Expected Winners : Ideally Chiayi Swingers have upper hand in this game but team batting first have higher chance to register a win this game .
Dream 11 Team For Small League 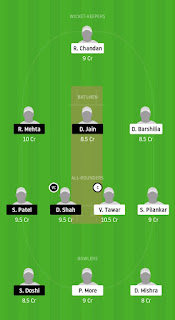 Note : This is a safe team and you can make changes in your as per your point of view .