Manchester United will host relegation favourites AFC Bournemouth at Old Trafford on weekend. Manchester United are placed on 5th position with 52 points in 32 matches whereas The Cherries are placed on 19th position with 27 points in same number of matches.
Manchester United are unbeaten in 15 games, winning 12 of them. This shows their classy form and they are just two points behind from fourth ranked Chelsea. A win over Bournemouth can make them place in top 4.
Red Devils maintained their excellent form against Seagulls at American Express Community Stadium on Thursday, registering a comfortable win by 3-0 margin. It was Bruno Fernandes who netted twice and a brilliant effort from young Mason Greenwood helped Manchester United to seal comfortable win.
On the other hand 4-1 defeat against Newcastle United was Bournemouth’s fourth successive defeat. Their further schedule is not so exciting as well. The Cherries will have to face Tottenham Hotspur, Leicester City, Manchester City in upcoming weeks. Although if we look at their away record this season, it seems somewhat better than at home. In 16 away games, Cherries have registered win in 3 games.
With successive 3-0 victories over Brighton & Hove Albion and Sheffield United, Red Devils will be pretty confident against lower ranked Bournemouth. With the likes of Marcus Rashford, Anthony Martial, Bruno Fernandes, Paul Pogba, heavy defeat for Cherries against United is on the cards.
Match Details
Venue – Old Trafford
Date – 4 July 2020
Timings – 7:30 PM ( IST )
Tournament – Premier League ( Round 33 )
Referee – Mike Dean
Where To Watch
Hotstar VIP
Star Sport Select 1
Star Sports Select HD1
Recent Form Of Both Teams ( In Last 5 matches )
Manchester United – W D W W W
Bournemouth – D L L L L
Man Utd Vs AFC Bournemouth Head To Head Record
In last 9 games that have been played between these two teams, Manchester United have emerged out as winners on 6 occasions, Bournemouth have tasted success twice, while one match resulted in a draw.
Team News
Manchester United
– Phil Jones is doubtful for the match.
– Axel Tuanzebe is also doubtful for the match.
AFC Bournemouth
– Charlie Daniels is back in training after having recovered from dislocated kneecap.
– Simon Francis is expected to be fit by early July 2020 from knee injury.
– Callum Wilson is suspended for this match.
Probable Lineup For Manchester United
( 4-2-3-1 )
David de Gea ; Aaron Wan Bissaka, Victor Nilsson Lindelöf, Harry Maguire, Brandon Williams ; Paul Pogba, Scott McTominay ; Daniel James, Bruno Fernandes, Marcus Rashford ; Anthony Martial.
Probable Lineup For AFC Bournemouth
( 4-5-1 )
Aaron Ramsdale ; Lloyd Kelly, Nathan Aké, Steve Cook, Adam Smith ; Arnaut Danjuma, Philip Billing, Jefferson Lerma, Lewis Cook, David Brooks ; Joshua King.
Key Players For Dream11 Fantasy Team Prediction In Small League
1. Marcus Rashford – 22 years old English winger has played 25 matches for Manchester United so far in this season where he ended up scoring 14 goals and assisted 6 times.
2. Joshua King – In the absence of Callum Wilson, Norwich centre forward will have huge responsibility on his shoulders. He has played 21 matches so far in this season where he ended up scoring 4 goals and assisted twice.
3. Aaron Wan Bissaka – English right back had played 29 games so far. He has 72 successful tackles, 52 clearances, 55 interceptions to his name. Apart from this he has assisted 4 times in 29 matches.
4. Philip Billing – 24 years old central midfielder has featured in 31 matches for Bournemouth. He has scored one goal and assisted once till now.
Who Should Be Captain In Manchester United Vs Bournemouth Dream11 Today?
Choosing right captain is always a cause of concern for Dream11 fantasy players. But don’t worry we have eased the task for you. We have analysed Bet 365 odds in order to provide you best choices for captain in this match and the choices for captain are –
1. Anthony Martial
2. Bruno Fernandes
3. Aaron Wan Bissaka
Players You Can Avoid In Grand League
You might have noticed that the team which wins grand league has some big players missing. After analysing Bet 365 odds we have shortlisted some players to whom you can avoid in grande league and those are –
1. Marcus Rashford
2. Joshua King
Manchester United Vs AFC Bournemouth Match Facts
👉 AFC Bournemouth have lost their last four matches.
👉 Manchester United have won 7 of their 8 home games against Bournemouth in all competitions.
👉 Manchester United have kept 5 clean sheets in their last 6 Premier League home matches.
👉 Bournemouth have lost 10 of their last 11 away games in Premier League.
👉 Manchester United are unbeaten in their last 15 matches in all competitions ( Won 11 Drawn 4 ).
Manchester United Vs Bournemouth Odds Comparison Case Study
Manchester United are currently placed at 1.16. If we calculate the winning percentage of  Manchester United at these odds then it comes out to be 86.20 percent. But recent studies shows that when a team is placed at these odds then it actually wins 91 percent of its matches.
On the other hand AFC Bournemouth are currently placed at 17.00. If we calculate the winning percentage of AFC Bournemouth at these odds then it comes out to be just 5.88 percent.
Manchester United Vs AFC Bournemouth Dream11 Team For Grand league 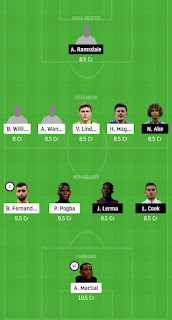 Join Our Dream11 Prediction Telegram Channel For Updates – @freeteams4d11
Disclaimer – We have created this team based on our own instincts and analysis. Make necessary changes in your final Dream11 once the lineup is announced. Read our preview and try to make your own Dream11 team.