Chelsea will travel to Selhust Park in order to face Crystal Palace on July 7. Chelsea are currently ranking on 4th position with 57 points in 33 matches whereas Crystal Palace are currently placed on 14th position with 42 points in same number of matches.
After 3-2 defeat at West Ham, Chelsea returned to winning momentum in their style when they thrashed Watford by 3-0. Now Manchester United are just two points away from them and they desperately need to register win in their remaining games in order to seal Champions League spot. Still Chelsea have chance to move to third spot this week because they are just one point behind Leicester City.
Crystal Palace hopes of qualification for Europa league faded after their poor form. Their recent form against The Blues are not even encouraging. The Eagles have lost their last 4 meeting with Chelsea, including a 2-0 defeat at Stamford Bridge earlier this season. Tammy Abraham and Christian Pulisic were the ones who scored for Chelsea in that meeting.
Although Crystal Palace’s chance of Europa league are nil but they have successfully avoided relegation zone this season. Roy Hodgson’s men have done extremely well against weaker sides this term, winning 8 of the 11 matches against bottom six sides. Although Eagles have failed to win at home against top sides in the ongoing season.
Crystal Palace have lost 6 of the 7 games against top 4 sides. They have conceded twice in all those 7 meetings. Eagles have conceded 13 chances per game on an average this season which is great cause of concern as they host quality side like Chelsea.
Match Details
Venue – Selhust Park
Date – 7 July 2020
Timings – 10:30 PM ( IST )
League – Premier League ( Round 34 )
Referee – David Coote
Recent Form Of Both Teams ( In Last 5 Matches )
Crystal Palace – W W L L L
Chelsea – W W W L W
Crystal Palace Vs Chelsea Head To Head Record ( In last 14 matches )
In last 14 games that have been played between these two sides, Crystal Palace have emerged out as winner on 4 occasions whereas Chelsea have won 10 games, no match resulted in a draw.
Team News
Crystal Palace
– James Tomkins is expected to be fit by mid July 2020 from hamstring injury.
– Jeffrey Schlupp is expected to be back in training by mid July 2020.
– Martin Kelly is expected to be fit from calf injury by mid July 2020.
Chelsea
– Charly Musonda is expected to recover from knee injury by late August 2020.
– Fikayo Tomori is a doubtful for this match.
– Marco van Ginkel is back in training after having recovered from cruciate ligament injury.
Probable Lineup For Crystal Palace
( 4-3-3 )
Vicente Guaita ; Joel Ward, Gary Cahill, Mamadou Sakho, Patrick van Aanholt ; James McCarthy, Luka Milivojevic, Cheikhou Kouyaté ; Andros Townsend, Jordan Ayew, Wilfried Zaha.
Probable Lineup For Chelsea
( 4-3-3 )
Kepa Arrizabalaga ; César Azpilicueta, Antonio Rüdiger, Andreas Christensen, Reece James ; Mason Mount, Jorginho, Ross Barkley ; Christian Pulisic, Olivier Giroud, Willian.
Key Players For Dream11 Fantasy Team Prediction In Small League
1. Willian – Brazilian winger has played 32 games for Chelsea this season where he ended up scoring 9 goals and assisted 5 times. His classical game has earned him Player of the match on 6 occasions.
2. Luka Milivojevic – 29 years old central mid-fielder has played 27 matches for Crystal Palace so far this season where he ended up scoring 3 goals and assisted once in total of 2255 minutes that he has spent on the field.
3. César Azpilicueta – 30 years old Spanish right back has played 31 matches in this premier League season so far. He has 47 successful tackles, 70 clearances, 58 interceptions to his name. Apart from this he has scored 2 goals and assisted 6 times.
4. Jordan Ayew – He has been top scorer for Crystal Palace this season. He has played 32 matches for Eagles where he ended up scoring 9 goals and assisted once.
Who Should Be Captain In Crystal Palace Vs Chelsea Dream11 Today?
Choosing right captain is always a cause of concern for Dream11 fantasy players. But don’t worry we have eased the task for you. We have analysed Bet 365 odds in order to provide you best choices for captain in this game and the choices are –
1. Christian Pulisic
2. Willian
3. César Azpilicueta
Players You Can Avoid In Grand League
You might have noticed that the team which emerge out as grand league winner has some big players missing. After analysing Bet 365 odds we have shortlisted few players to whom you can avoid in grand leagues and those are –
1. Olivier Giroud
2. Luka Milivojevic
Crystal Palace Vs Chelsea Match Facts
👉 Crystal Palace have lost 4 of their last 5 home games that they have played against Chelsea.
👉 Crystal Palace are the only unbeaten side in Premier League home London Derbies this season.
👉 Crystal Palace have lost their last 3 Premier League games without scoring a single goal.
👉 Against Watford, Willian became the 6th player in Premier League history to score penalty in 3 consecutive appearances in the competition, no player has ever scored from penalty in 4 successive games.
Crystal Palace Vs Chelsea Odds Comparison Case Study
Crystal Palace are currently placed at 8.10. If we calculate the winning percentage of Crystal Palace at these odds then it comes out to be 12.34 percent.
On the other hand Chelsea are currently placed at 1.48. If we calculate the winning percentage of Chelsea at these odds then it comes out to be 67.56 percent.
Crystal Palace Vs Chelsea Match Winner Prediction
Chelsea enter this game as huge favourites. Even their record against Eagles is impressive but still we believe that Chelsea might face an upset in this game. Hence we are backing Crystal Palace To Win.
Crystal Palace Vs Chelsea Dream11 Team 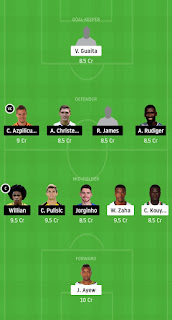