After the last qualifier in Pool 1 of Taipei T10 between Hsinchu Titans and Taiwan Daredevils got abandoned due to heavy rainfall, things doesn’t look much promising as meteorological department has predicted heavy rainfall for this fixture and we might see another rescheduling .
In the last qualifier Taiwan Daredevils were put on to bat first and they managed a score of 26 with the loss of one wicket. Opener Thomas Neil was struck by Manikandan Arumugam in his first over. Cricket fans could only saw a game of three overs before the arrival of rain which continued for long as a result of which , qualifier got abandoned and was rescheduled.
In their last meeting , Taiwan Daredevils could only manage 48 for 6 in 10 overs. Except George Klopper no other batsman in the side could manage to get into double figure mark. Openers Hein Nothnagel and Johan Koekemoer faced 17 and 9 deliveries each, scoring just  6, 7 with the poor strike rates of 35.29 , 77.78 which left Daredevils in deep trouble . It was George Klopper who scored 20 useful runs for his side before getting run out. Thanks to Joyal Francis , Pramod Kumar Mandal, Manikandan Arumugam for their spectacular bowling spells.
Although Francis went wicketless with an awesome economy rate of 2.50 but Manikandan Arumugam and Pramod Kumar Mandal claimed 2-2 wickets each leaving Daredevils in deep trouble. Chasing a small total of 49 Manikandan quick fired with 22 off 16 deliveries. For Hsinchu Titans he was the lone warrior with the bat as wickets on another side kept falling on regular intervals but in the end Titans finished the match with a victory. George Klopper, Charles Hayward, Jeff Black claimed 1 wicket each.
Pitch And Weather Conditions : Things doesn’t look much promising for this reschedule fixture as AccuWeather predicted heavy rainfall during the match hours . If rain doesn’t come then we might see a good contest between bat and ball. Although batting first has been a match winning strategy for this tournament but looking at the weather condition it will be wise that captain winning the toss should opt to bowl first.
Hsinchu Titans Playing 11 ( Predicted )
Manikandan Arumugam, Vijay Kumar, Joyal Francis, Raguram( C ) , Pramod Kumar Mandal, Thomas Rayen, Karuna Nidhi, Vijay Ganisetty, Vinay MS, Venky Rebel, Rajendran Manikandan.
Taiwan Daredevils Playing 11 ( Predicted )
Shane Ferreira, Thomas Neil, Tertius De Jager, Duane Christie, Jeff Black, George Klopper, Ben Hall, Charles Hayward, Hein Nothnagel, Johan Koekemoer, Rob Schulenburg.
Top Picks From Hsinchu Titans Side
1. Joyal Francis
2. Pramod Kumar Mandal
3. Vinay MS
Top Picks From Taiwan Daredevils Side
1. Thomas Neil
2. Jeff Black
3. Johan Koekemoer
Hsinchu Titans Vs Taiwan Daredevils Match Winner Prediction
Hsinchu Titans claimed an easy victory over Taiwan Daredevils in the group stages and that’s what is getting reflected in odds. Hsinchu Titans are placed at 1.80 as clear favourites to win this game.
So our prediction is that you must back Titans to win this game as Hsinchu Titans have 58 percent chance to win this game. Key aspects of this game are
HST vs TDR Dream11 Team 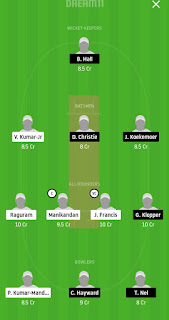 Disclaimer : This team is based on our analysis, please read our full preview and then try to make your own Dream11 team with your own analysis. Don’t copy and paste the same team blindly.

One thought on “Will It Be Abandoned Again ? Taipei T10 HST Vs TDR Dream11 Preview, Betting Tips”