13th match if Vincy Premier League T10 will witness an encounter between Grenadines Divers and La Soufriere Hikers. La Soufriere Hikers are having a great season so far with three wins from 4 total matches played and they are sitting on 2nd position in the points table. On the other hand things doesn’t look much promising for Grenadines Divers. Till now they have played four matches out which they won  just one and lost three. Divers lost their last match which they played against Dark View Explorers.
In the 12th match Grenadines Divers met Dark View Explorers. After winning the toss Explorers decided to bat first. Deron Greaves and Shammon Hooper opened the innings for Explorers and both the openers registered a partnership of 59 runs in 6.4 overs between them. Greaves scored 27 runs off 23 deliveries while Hooper managed to score 34 off 22. For Divers, Obed McCoy took 2 wickets after conceding 11 runs in his two overs spell. Razine Browne, Braxie Browne took 1-1 wicket each. Their star player Asif Hooper went wicketless although he did managed to keep his economy rate under 5. Dark View Explorers scored 86/4 in their 10 overs game.
Chasing a total of 87 runs in 10 overs, opener Shem Browne along with Asif Hooper started innings on a slower rate. Browne was seen struggling with the bat as he scored 13 off 14 deliveries while Hooper scored 14 off 12. Alex Samuel was their highest run getter in the match and the only batsman in the team to surpass 15 run mark. Middle order of Divers stumbled completely and no batsmen in their middle order could surpass double figure mark. For Explorers Sealron Williams claimed three wickets while Deron Greaves, Shammon Hooper, Darius Martin took 1-1 wicket each. At the end of 10 overs, Divers could score 80 for the loss of 8 wickets which resulted in another their defeat by 7 runs.
On the other side La Soufriere Hikers locked their horns against Fort Charlotte Strikers in the 11th match Vincy Premier League. While batting first Hikers managed to score 84/5 in 10 overs. Salvan Browne was their top batsman as he scored 44 in 28 deliveries. Although it was not a huge total but thanks to Othneil Lewis, Kenson Dalzell for their superb bowling effort. Both these bowler took 2 wickets each after not conceding much runs. Dean Browne, Jeremy Haywood were also among the wicket takers, both of them took 1-1 wickets each. It was their bowling unit who successfully defended the total of 84.
Match Details
Venue : Arson Valley Ground
Date : 26 May 2020
Timings : 6:00 PM ( IST )
League : Vincy Premier League T10
Weather Condition – The conditions for this match will be little cloudy so there are chances of rain although chances of interruption are quite less.
Pitch Conditions – In the first round of the tournament pitch was good for chasing as initial games were won by chasing team. But now as the tournament is progressing, pitch is turning out to be on a slower side in second innings. Teams batting first are now enjoying success. Same trend should continue for this match too.
Probable 11 For La Soufriere Hikers
1. Salvan Browne ( WK )
2. Desron Maloney ( C )
3. Dillon Douglas
4. Dean Browne
5. Rawdon Bentick
6. Casmus Hackshaw
7. Camano Cain
8. Rayan Williams
9. Othneil Lewis
10. Jeremy Haywood
11. Kenson Dalzell
Probable 11 For Greandine Divers
1. Shem Browne
2. Asif Hooper ( C )
3. Alex Samuel
4. Tijorn Pope
5. Richie Richards
6. Razine Browne
7. Wayne Harper
8. Anson Latchman ( WK )
9. Obed McCoy
10. Geron Wyllie
11. Braxie Browne
Key Players For Dream11 Prediction
1. Salvan Browne is emerging as a key player for La Soufriere Hikers at top of the order. He has scored 103 runs at a strike rate of 163.4 while opening the innings for his team.
2. Dillon Douglas is another key player as he is batting one down and consistently scoring runs for his team. Till now he has scored 100+ runs in four matches with a strike rate of 158.73.
3. Othneil Lewis, Jeremy Haywood, Kenson Dalzell will be the bowler which every fantasy player will like to pick in their Dream11 team.
4. Asif Hooper, the premium all rounder for Grenadines Divers has scored 79 runs in four matches and has picked up 3 wickets so far.
5. Looking at bowling unit of Divers Obed McCoy, Razine Browne, Braxie Browne have picked up 4 wickets.
GRD VS LSH Match Winner Prediction
La Soufriere Hikers are currently placed on second position if we talk about points table. On other other hand Grenadines Divers have registered only one win in their 4 matches. La Soufriere Hikers are currently placed at 1.64, taking odds into consideration. If look at winning chances of both these two teams then La Soufriere Hikers have 66.7 percent winning chances.
GRD VS LSH DREAM11 TEAM 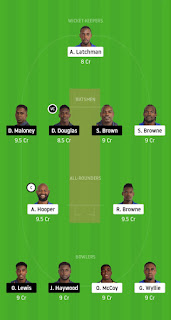 Disclaimer – We have created this team based on our own instincts and analysis. Make necessary changes in your final Dream11 team once the lineup is announced. Read our preview and try to make your own team.