Newly crowned champions will host relegation favourites Aston Villa on Sunday at Anfield. The Reds are currently ranking on number one position in points table with 86 points in 32 matches. On the other hand Aston Villa are currently placed on 18th position with 27 points in same number of matches.
Liverpool’s first match after being crowned to Premier League title didn’t go as per expectations as they were ruined by former champions by 4-0. However their first game at Anfield after becoming champions is expected to go smoother as they host relegation favourites Aston Villa. With the likes of Mohamed Salah, Sadio Mane, The Reds are huge favourites in this game.
Aston Villa’s away record this season has been poorer. Out of the total 16 away games, The Clarets have won just two matches, 3 games resulted in a draw and they faced defeats in the remaining ones. Their last win over Liverpool at Anfield came back in September 2014.
But as for now it seems nearly impossible for The Clarets to grab points at Anfield on Sunday, taking Liverpool’s current form into consideration. Liverpool are enjoying 100% winning record at Anfield this season. Apart from this Liverpool have kept clean sheets in 6 of their last 8 games in Premier League that they have played on their home ground. So we can expect Liverpool to keep another clean sheet in this game.
Match Details
Venue – Anfield
Date – 5 July 2020
Timings – 9:00 PM ( IST )
League – Premier League ( Round 33 )
Referee – Paul Tierney
Where To Watch
Hotstar VIP
Star Sport Select 1
Star Sports Select HD1
Recent Form Of Both Teams ( In Last 5 Matches )
Liverpool – W L D W L
Aston Villa – L D L D L
Team News
Liverpool
– Dejan Lovren is a doubtful for this match.
– Joel Matip is expected to recover from ankle injury by mid August 2020.
– Xherdan Shaqiri is expected to return on the field in next few days.
Aston Villa
– Björn Engels is expected to be fit in few days from leg injury.
– Frédéric Guilbert is doubtful for this match with a knee injury.
– Henri Lansbury is a doubtful for this match with a muscle injury.
– Matthew Robert Targett is expected to recover from hamstring injury in few days.
– Tom Heaton will be out action till late August 2020 as he has not recovered from knee injury.
– Wesley Moraes is expected to recover from knee injury by late August 2020.
Probable Lineup For Liverpool
( 4-3-3 )
Alisson ; Andrew Robertson, Virgil van Dijk, Joe Gomez, Trent Alexander Arnold ; Alex Oxlade – Chamberlai, Fabinho, Naby Keïta ; Sadio Mané, Roberto Firmino, Mohamed Salah.
Probable Lineup For Aston Villa
( 4-3-3 )
Ørjan Nyland ; Neil Taylor, Tyrone Mings, Kortney Hause, Ezri Konsa ; Marvelous Nakamba, Douglas Luiz, John McGinn ; Jack Grealish, Keinan Davis, Ahmed El – Mohamady.
Key Players For Dream11 Fantasy Team Prediction In Small League
1. Sadio Mané – 28 years old pacy winger has played 29 matches so far where he ended up scoring 15 goals and assisted 7 times.
2. Jack Grealish – 24 years old English winger has played 29 matches for Aston Villa so far where he ended up scoring 7 goals and assisted 6 times.
3. Trent Alexander Arnold – Young English right back has been phenomenal this season. He has featured in 32 matches so far. He has 33 successful tackles, 62 clearances, 41 interceptions to his name. Apart from this he has also scored 3 goals and assisted 12 times in ongoing Premier League season.
Who Should Be Captain In Liverpool Vs Aston Villa Dream11 Today?
Choosing right captain is always a cause of concern for Dream11 fantasy players. But don’t worry we have analysed Bet 365 odds in order to provide you best choices for captain in this match and the choices are –
1. Mohamed Salah
2. Sadio Mané
3. Anwar El Ghazi
Players You Can Avoid In Grand League
You might have noticed that the team which emerge out as grand league winner has some big players missing. After analysing Bet 365 odds we have listed the players to whom you can avoid in grand league and those players are –
1. Roberto Firmino
2. Keinan Davis
Liverpool Vs Aston Villa Match Facts
👉 Liverpool have 100% winning record at Anfield this season.
👉 Aston Villa have failed to score in 4 of their last 6 league matches.
👉 Liverpool have won their last 4 matches in Premier League against Aston Villa by an aggregate score of 13-3.
👉 Aston Villa have only lost 1 of their last 5 Premier League away matches against Liverpool.
👉 Liverpool Vs Aston Villa has seen more away wins than any other fixture in Premier League history.
Liverpool Vs Aston Villa Odds Comparison Case Study
Liverpool are currently placed at 1.33. If we calculate the winning percentage of Liverpool at these odds then it comes out to be 75.18 percent. But recent studies shows that when a team is placed at these odds then it actually wins 85 percent of its matches.
On the other hand Aston Villa are currently placed at 8.50. If we calculate the winning percentage of Aston Villa at these odds then it comes out to be 11.76 percent.
Liverpool Vs Aston Villa Match Winner Prediction
Liverpool are huge favourites in this game. They have not lost any game at Anfield this season but our analysis shows that Liverpool might face an upset in this game. So we are backing Aston Villa To Win.
Liverpool Vs Aston Villa Dream11 Team For Small League 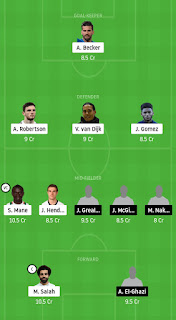