Arsenal returns to Emirates Stadium as they will host bottom ranked Norwich City on Wednesday. Although Arsenal’s project restart was a nightmare after facing successive defeats against former champions Manchester City, Brighton & Hove Albion but The Gunners bounces back in fashion as they defeated Southampton in Premier League and Sheffield United in FA Cup Quarter Final.
With 43 points in 31 Arsenal is currently sitting on 10th position whereas The Canaries are placed at bottom of the points table with 21 points in same number of matches.
Arsenal defeated Saints comfortably by 2-0 but their FA Cup Quarter Final against The Blades was their real test. Many thought that Mikel Arteta’s side will face another upset when their lead was cancelled by David McGoldrick’s strike in 87th minute. It was Dani Ceballos who striked dramatically in the injury time to fix their semi final clash Manchester City next month.
On the other hand nothing is going right for Norwich City since the restart. Now they have lost three consecutive games since the league’s resumption. Daniel Farke men faced defeat against the Toffees. Farke decided to rest key players against Everton in order to keep his key players refreshed for FA Cup but his decision backfired as the Canaries faced defeats in both the games.
There is absolutely no doubt that Arsenal are huge favourite in this game. They do have home advantage in this game but the victory margin doesn’t seem to be huge as Arsenal are just averaging 1.58 goals per game under Mikel Arteta.
Match Details
Venue – Emirates Stadium
Date – 1 July 2020
Timings – 10:30 PM ( IST )
League – Premier League ( Round 32 )
Referee – Peter Bankes
Recent Form Of Both Teams ( In Last 5 Matches )
Arsenal – W L L W W
Norwich City – D L L L L
Arsenal Vs Norwich City Head To Head Record ( In Last 10 Games )
In last 10 games that have been played between Arsenal and Norwich City, Gunners emerged out as winners on 6 occasions, Norwich City won just once while three games ended in a draw.
Team News
Arsenal
– Their front line keeper Bernd Leno will remain out of action till early August 2020.
– Calum Chambers is struggling with knee injury and is expected to be back on field by mid August 2020.
– David Luiz is expected to be fit by mid July 2020 from hamstring injury.
– Gabriel Martinelli is expected to be fit by late July 2020 from knee injury.
– Mesut Özil is expected to recover from back injury by early July 2020.
– Pablo Mari Villar is expected to be fit by late August 2020 from ankle injury.
Norwich City
– Christoph Zimmermann is expected to recover from hamstring injury by early August 2020.
– Grant Hanley is expected to be in fit by late July 2020 from hamstring injury.
– Sam Byram is expected to be back on field by early August 2020 from hamstring injury.
Probable Lineup For Arsenal
( 3-4-3 )
Emiliano Martinez ; Shkodran Mustafi, Rob Holding, Kieran Tierney ; Hector Bellerin, Daniel Ceballos, Granit Xhaka, Bukayo Saka; Nicolas Pépé, Edward Nketiah, Pierre – Emerick Aubameyang.
Probable Lineup For Norwich City
( 4-2-3-1 )
Tim Krul ; Jamal Lewis, Timm Klose, Ben Godfrey, Max Aarons ; Kenny McLean, Alexander Tettey ; Todd Cantwell, Ondrej Duda, Emiliano Buendía ; Teemu Pukki.
Key Players For Dream11 Fantasy Team Prediction
1. Nicolas Pépé – 25 years old right winger has emerged out as new goal scoring machine for Arsenal in recent matches. He has scored 5 goals and assisted 6 times in 26 matches that he has played so far in this season. Apart from this he has been named Player of the match thrice.
2. Daniel Ceballos – The Spaniard proved his worth in FA Cup Quarter Final against Sheffield United when his strike in injury time shattered United’s hope for semi final spot. Although he hasn’t scored any goal in 17 Premier League games that he has played but he assisted twice in those games.
3. Emiliano Buendía – 23 years old young Argentine right winger has played 30 games for The Canaries. He hasn’t scored any goal but he has 7 assists to his name so far.
Who Should Be Captain In Arsenal Vs Norwich City Dream11 Today?
Choosing right Captain is always a cause of concern for Dream11 fantasy players. But don’t worry we have eased the task for you. We have analysed Bet365 odds in order to provide you best choices for captain in this match and the choices are –
1. Pierre – Emerick Aubameyang
2. Nicolas Pépé
3. Hector Bellerin
Players You Can Avoid In Grand League
You might have noticed that the team that win grand league has some big Players missing. After analysing Bet365 odds we have shortlisted some players to whom you can avoid in Grand league and those are –
1. Edward Nketiah
2. Emiliano Buendía
Arsenal Vs Norwich City Match Facts
👉 Norwich City have lost their last 4 matches.
👉 Arsenal have lost only of their 8 Premier League home game against Norwich City and that defeat came back on 15 August 1992.
👉 Norwich City have kept just one clean sheet in their last 12 Premier League games that they placed against Arsenal. .
👉 Arsenal are unbeaten in their last 26 home games in Premier League against promoted sides.
👉 Norwich City have scored just one goal in their last 7 Premier League matches.
Arsenal Vs Norwich City Odds Comparison Case Study
Arsenal are currently placed at 1.44. If we calculate the winning percentage of Arsenal at these odds then it comes out to be 69.44 percent.
On the other hand Norwich City are currently placed at 7.00. If we calculate the winning percentage of Norwich City at these odds then it comes to be 14.28 percent.
Arsenal Vs Norwich City Match Winner Prediction
Arsenal are better team than Norwich City without any doubt. They will play at their home ground and after analysing several aspects of this game we back Arsenal To Win.
Arsenal Vs Norwich City Dream11 Team 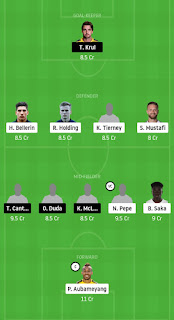