Relegation threatened Aston Villa will host fourth ranked Chelsea at Villa Park on Sunday. This game will be crucial for Frank Lampard’s men as there is only 2 points difference between them and sixth ranked Wolves. A lot more can happen in the points table by the end of this summer so this is a sort of must win game for The Blues.
Chelsea is already in headlines after the news of signing highly rated striker Timo Werner off the pitch. Before the suspension of league back in March, Chelsea were able to find their form as they won two of their three Premier League games.
For Aston Villa it will be their second match after the lockdown. The first match gave them unexpected result due to technical failure, as a result of which they claimed points after five successive defeats. It was also a rare clean sheet from Villa’s perspective.  They have poor record against top 6 sides of the tournament with no win and 19 defeats in their last 21 matches.
Especially against Chelsea their record is extremely poor. The Blues have crushed Dean Smith’s side in 9 games out of their last 10 games. Apart from this The Blues are on their best ever winning run with 5 consecutive wins. We don’t see Villa taking any point on here at Villa Park when they host high ranked Chelsea.
Match Details
Venue – Villa Park, Birmingham
Date – 21 June 2020
Timings – 8:45 PM ( IST )
League – Premier League ( Round 30 )
Referee – Paul Tierney
Where To Watch
Hotstar VIP
Star Sorts Select 1
Star Sports Select HD1
Team News
Aston Villa
– Björn Engels is out from the action for few weeks due to leg injury.
– Daniel Drinkwater will be available by late June 2020.
– Frédéric Guilbert is expected to be fit by early July 2020 from his knee injury.
– Tom Heaton will be available by late August 2020.
– Wesley Moraes is expected to be fit by late August 2020 from his knee injury.
Chelsea
– Callum Hudson- Odoi is expected to join the team by late June 2020.
– Charly Musonda is expected to recover from his knee injury by late August 2020.
– Fikayo Tomori is expected to start training by early July 2020.
– Marco van Ginkel is back in training after having recovered from cruciate ligament injury.
– Jorginho is suspended for this match.
Recent Form Of Both Teams
Chelsea – W L D W W
Aston Villa – L L L L D
Probable Lineup For Aston Villa
( 4-3-3 )
Pepe Reina ; Ezri Konsa, Kortney Hause, Tyron Mings, Matt Targett ; John McGinn, Marvelous Nakamba, Douglas Luiz ; Anwar El – Ghazi, Mbwana Samatta, Jack Grealish.
Probable Lineup For Chelsea
( 4-3-3 )
Kepa Arrizabalaga ; Marcos Alonso, Kurt Zouma, Antonio Rüdiger, César Azpilicueta ; Mason Mount, Billy Gilmour, N’Golo Kanté ; Christian Pulisic, Tammy Abraham, Willian.
Key Players For Dream11 Prediction
1. Jack Grealish – 24 years old English winger will be key for Villa if they want to find net against side like Chelsea. He has played 27 matches so far where he ended up scoring 7 goals along with 6 assists.
2. John McGinn – 25 years old Scottish central midfielder will be a key in Villa’s midfield. He has played 19 matches so far and scored 3 goals along with 2 assists.
3. Willian – Brazilian star winger has lot of experience under his belt. He has played 28 matches so far and ended up scoring 5 goals and assisted the same number of times.
4. César Azpilicueta – Spanish right back had played 27 matches so where he was named Player of the match on a single occasion. He has 39 successful tackles, 62 clearances, 50 interceptions to his name.
Chelsea Vs Aston Villa Match Facts
👉 Aston Villa have lost 9 of their last 10 Premier League games against Chelsea. Their last win came back in 2014 against Chelsea at Villa Park.
👉 Chelsea have won their last 5 league games against Aston Villa.
👉 Aston Villa have just taken 2 points in their last 63 games against top 6 sides in Premier League.
👉 Chelsea have not won their any of the last 4 away Premier League games in 2020.
👉 Willian has scored in each of his last two games in all competitions for Chelsea.
Who Should Be Captain In Chelsea Vs Aston Villa Dream11 Today?
After analysing Bet365 odds market, the best choices for Captain in this match should be
1. Tammy Abraham
2. Mason Mount
3. César Azpilicueta
Big Players You Can Avoid In Grand League
1. Willian
2. Anwar El Ghazi
3. John McGinn
Chelsea Vs Aston Villa Odds Comparison Case Study
Chelsea are placed at 1.50. If we calculate the winning percentage of Chelsea with these odds then it comes out to be 66.66 percent. But recent studies shows that when a team is placed at these odds then it actually wins 62 percent of its matches.
On the other hand Aston Villa are currently placed at 6.00. If we calculate the winning percentage of Aston Villa with these odds then it comes out to be 16.66 percent. But recent studies shows that when a team is placed with these odds then it actually wins 1 percent of its matches.
Aston Villa Vs Chelsea Dream11 Team 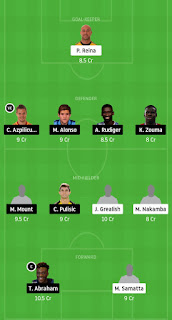