Newly crowned Champions will host Burnley at Anfield this weekend. With 92 points in 34 matches, Liverpool have sealed top ranking this season. On the other hand Burnley are currently placed at 10th position with 49 points in 34 matches.
Liverpool won their 30th match of this season on Wednesday at Brighton and this victory made them the fastest team to do so in Premier League history. With more wins, Jürgen Klopp’s side is eyeing for more records in their rank. Liverpool are huge favourites as they host Clarets, after having won all four last meeting against them. Moreover they have 100 percent winning record at Anfield this season and should maintain the same momentum against Burnley.
On the other hand Burnley registered 1-0 narrow win over relegation threatened West Ham United in their last meeting in the capital. It was Burnley’s third win in last 4 games after loosing to Manchester City on June 22. Claret’s defense looks solid for now but it seems nearly impossible that they will be able to tackle Liverpool at Anfield.
The Reds have scored 3 or more goals in each of their last meetings with Burnley, including a reverse Premier League fixture between the two sides this season back in August that finished 3-0 in favour of Liverpool at Turf Moor – a venue always hard to score at.
With strong attacking lineup, Liverpool have averaged 2.7 goals per 90 minutes game action at Anfield this term. They have scored 3 or more in eight of their 17 fixtures this season.
Match Details
Venue – Anfield
Date – 11 July 2020
Timings – 7:30 PM ( IST )
League – Premier League ( Round 35 )
Referee – David Coote
Where To Watch
Hotstar VIP
Star Sport Select 1
Star Sports Select HD1
Recent Form Of Both Teams ( In Last 5 Matches )
Liverpool –  D W L W W
Burnley – L W W D W
Liverpool Vs Burnley Head To Head Record ( In last 9 Premier League games )
In last 9 Premier League games that have been played between these two teams, Liverpool have won on 7 occasions, one match resulted in a draw, remaining one was won by Burnley.
Team News
Liverpool
– Dejan Lovren is a doubtful for this match.
– Joel Matip is expected to recover from ankle injury by mid August 2020.
– Jordan Henderson is expected to be fit from knee injury by late July 2020.
Burnley
– Ashley Barnes will be out of action by mid July 2020 due to hernia.
– Centre back Ben Mee is expected to recover from thigh injury by late July 2020.
– Jack Cork is expected to be fit from ankle injury by late July 2020.
– Matthew Lowton will be out of action till late July 2020 due to foot injury.
Probable Lineup For Liverpool
( 4-3-3 )
Alisson Becker ; Trent Alexander Arnold, Joseph Gomez, Virgil van Dijk, Andrew Robertson ; Naby Keïta, Fabinho, Georginio Wijnaldum ; Mohamed Salah, Roberto Firmino, Sadio Mané.
Probable Lineup For Burnley
( 4-4-2 )
Nick Pope ; Charlie Taylor, James Tarkowski, Kevin Long, Phil Bardsley ; Dwight McNeil, Josh Brownhill, Ashley Westwood, Erik Pieters ; Chris Wood, Jay Rodriguez.
Key Players For Dream11 Fantasy Team Prediction In Small League
1. Mohamed Salah – Egyptian winger has featured in 30 matches for Liverpool this season where he ended up scoring 19 goals and assisted 9 times. Only Jamie Vardy has scored more goals than him this season. Salah is also strong candidate for golden boot.
2. Ashley Westwood – 30 years old central English mid fielder has played 31 matches so far. He has scored two goals and assisted six times. He is one the key player in Burnley team.
3. Trent Alexander Arnold – 21 years old English right back has played 34 matches for Reds. He has 33 successful tackles, 65 clearances, 43 interceptions to his name. Apart from this he has assisted 12 times this term.
Who Should Be Captain In Liverpool Vs Burnley Dream11 Today?
Choosing right captain is always a cause of concern for Dream11 fantasy players. But don’t worry we have analysed Bet 365 odds in order to provide you best choices for captain in this match and those choices are –
1. Mohamed Salah
2. Sadio Mané
3. Trent Alexander Arnold
Players You Can Avoid In Grand League
You might have noticed that the team which wins grand league has some big players missing. After analysing Bet 365 odds we have shortlisted some players to whom you can avoid in grand leagues and those players are –
1. Jay Rodriguez
2. James Tarkowski
Liverpool Vs Burnley Match Facts
👉 Liverpool have won previous 4 matches against Burnley.
👉 Liverpool have 100 percent winning record at Anfield this season.
👉 Liverpool have won 85 percent of their Premier League games against Burnley.
👉 Victory in this match will see Liverpool equal the record for most home wins in a single Premier League campaign.
👉 Burnley have won 14 Premier League games this season, equalling their best season for wins in the competition in 2017-18.
Liverpool Vs Burnley Odds Comparison Case Study
Liverpool are currently placed at 1.25. If we calculate the winning percentage of Liverpool at these odds then it comes out to be 80 percent. But recent studies shows that when a team is placed at these odds then it actually wins 95 percent of its matches.
On the other hand Burnley are currently placed at 12.00. If we calculate the winning percentage of Burnley at these odds then it comes out to be 8.33 percent.
Liverpool Vs Burnley Dream11 Team For Small League 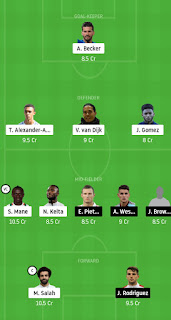