Jul 14, 2020
Match Preview
Chelsea will host relegation favourites Norwich City on Tuesday. Chelsea are currently placed on third position with 60 points from 35 matches. On the other hand Norwich City are placed on bottom of the points table with 21 points in same number of matches.
Chelsea’s top 4 spot got major blow when they were completely outclassed by Sheffield United – who are desperately hunting for European football. Chelsea are now just two points ahead of Ole Gunnar Solskjaer’s side, having played a game more.
A win for Manchester United against Saints on Monday will make Champions League race quite interesting. But against sides like Norwich City it is unlikely that Chelsea will remain out of top 3 for long.
On the other hand nothing is going in Canaries favour. They were defeated by West Ham United with a goal margin of 4-0. They were blown lonely by Michael Antonio who netted four times. This was Norwich City’s seventh consecutive defeat in the Premier League this season.
It’s nearly impossible for the visitors to get any points at Stamford Bridge. Although Chelsea have suffered unexpected defeats but still they have won five of their last seven Premier League matches in which they netted 16 goals.
Visitors have conceded 15 goals in six Premier League games since the project start, which means Chelsea are on the verge of earning some easy points here. Chelsea have scored atleast three goals in three of their last 7 league matches and all of them came against sides in the bottom half. So over 2.5 goals in this match seems to be the most favourable bet.
Match Details
Venue – Stamford Bridge
Date – 15 July 2020
Timings – 12:45 AM ( IST )
Tournament – Premier League ( Round 36 )
Referee – Jon Moss
Chelsea Vs Norwich City Head To Head Record ( In last 11 games )
In last 11 games that have been played between these two teams, Chelsea have won 7 matches, 4 games ended in a draw while Norwich City remained winless.
Recent Form Of Both Teams ( In last 5 matches )
Chelsea – W L W W L
Norwich City –  L L L L L
Team News
Chelsea
– Billy Gilmour is expected to recover from ligament injury by mid October 2020.
– Charly Musonda will be fit from muscle injury by late August 2020.
– Fikayo Tomori is expected to be back on field in few days as he is recovering from muscle injury quite speedily.
– Marco van Ginkel is back in training after having recovered from cruciate ligament injury.
– N’Golo Kanté will remain out of field for few days after he picked up hamstring injury.
Norwich City
– Christoph Zimmermann is expected to recover from hamstring injury by early August 2020.
– Grant Hanley will be fit from hamstring injury by early August 2020.
– Moritz Leitner is expected to recover from groin injury by late September 2020.
– Sam Byram will be back on field by early August 2020.
Probable Lineup For Chelsea
( 4-3-3 )
Kepa Arrizabalaga ; Reece James, Andreas Christensen, Kurt Zouma, César Azpilicueta ; Ross Barkley, Jorginho, Mason Mount ; Willian, Olivier Giroud, Christian Pulisic.
Probable Lineup For Norwich City
( 4-2-3-1 )
Tim Krul ; Jamal Lewis, Timm Klose, Ben Godfrey, Max Aarons ; Mario Vrancic, Alexander Tettey ; Onel Hernández, Marco Stiepermann, Emiliano Buendía ; Teemu Pukki.
Key Players For Dream11 Fantasy Team Prediction In Small League
1. Willian – Brazilian winger has played 34 matches so far in this season where he ended up scoring 9 goals and assisted 7 times.
2. César Azpilicueta – Spanish right back has featured in 33 matches. He has scored two goals and assisted 6 times. Apart from this, he has 50 successful tackles, 76 clearances, 63 interceptions to his name.
3. Emiliano Buendía – 23 years old young Argentine winger has played 34 matches for Canaries in Premier League this season. He has scored one goal but assisted 7 times.
4. Christian Pulisic – American winger got lots of praises from former Chelsea’s hero – Frank Lampard recently. In 22 matches he has scored 8 goals and assisted twice.
Who Should Be Captain In Chelsea Vs Norwich City Dream11 Today?
Choosing right captain is always a cause of concern for Dream11 fantasy players. But don’t worry we have eased the task for you. We have analysed Bet 365 odds in order to provide you best choice for captain in this match and those choices are –
1. Willian
2. Christian Pulisic
3. Mason Mount
Players You Can Avoid In Grand League
You might have noticed that the team which wins grand league has some big players missing. After analysing Bet 365 odds we have shortlisted some players to whom you can avoid in grand league and those players are –
1. Todd Cantwell
2. Mario Vrancic
3. Reece James
Chelsea Vs Norwich City Match Facts
👉 Chelsea haven’t lost to Norwich City in last three meetings.
👉 Chelsea are unbeaten in their last 16 meetings against Norwich City in all competitions ( Won 11 Drawn 5 ) since a 0-3 loss in December 1994.
👉 Chelsea have won their last 4 Premier League matches at Stamford Bridge, scoring atleast 2 goals in each victory.
👉 Norwich City have lost 24 Premier League games this season.
👉 Norwich City are on a run of seven consecutive Premier League defeats – they have never lost 8 consecutive league matches in their history.
Chelsea Vs Norwich City Odds Comparison Case Study
Chelsea are currently placed at 1.12. If we calculate the winning percentage of Chelsea at these odds then it comes out to be 89.28 percent. But recent studies shows that when a team is placed at these words then it actually wins 79 percent of its matches.
On the other hand Norwich City are currently placed at 17.00. If we calculate the winning percentage of Norwich City at these odds then it comes out to be 5.88 percent.
Chelsea Vs Norwich City Dream11 Team For Small League 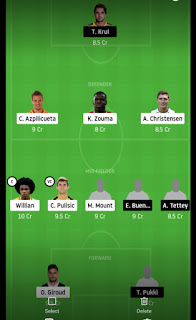 Join Our Dream11 Prediction Telegram Channel For Updates – @freeteams4d11
Disclaimer – We have created this team based on our own instincts  and analysis. Make necessary changes in your final Dream11 team once the lineup is announced. Read our preview and try to make your own Dream11 team