Relegation favourites Aston Villa will host in form Red Devils on Thursday at Villa Park. Aston Villa are currently placed on 18th position in points table with 27 points in 33 matches and are strong candidates for relegation this season. On the other hand Manchester United are currently placed on 5th position with 55 points in same number of matches. Red Devils are constantly building pressure on Chelsea, Leicester City in order to grab Champions League spot.
Aston Villa is carrying a poor form as they are winless in 9 Premier League games, loosing 7 of those and managed draws against Sheffield United, Newcastle United. There is a big loop hole in their defence. Aston Villa have conceded 17 goals in last 9 games, averaging nearly 2 goals conceded per game. In these 9 matches they have been able to score just 5.
On the other hand Manchester United’s defense was also not promising against Bournemouth but their solid attack helped them to register emphatic win over The Cherries. Ole Gunnar Solskjaer’s side completely outclassed Bournemouth. Thanks to strikes from young Mason Greenwood, Anthony Martial, Marcus Rashford.
Ole Gunnar Solskjaer’s side is certainly the team in form in Premier League. They are now unbeaten in 16 games, winning 12 of them and have scored 43 goals in the process. In the upcoming weeks, Manchester United will face sides like Southampton, Crystal Palace, West Ham and Leicester City, they still have the chance for Champions League qualification.
Manchester United have scored atleast three goals in each of their last 3 Premier League games and Villa have conceded three or more on 9 occasions against top sides, so goals over 2.5 seems to be the most favourable bet in this match.
Match Details
Venue – Villa Park
Date – 10 July 2020
Timings – 12:45 AM ( IST )
Tournament – Premier League ( Round 34 )
Referee – Jon Moss
Where To Watch
Hotstar VIP
Star Sport Select 1
Star Sports 1
Star Sports Select HD1
Aston Villa Vs Manchester United Head To Head Record ( In Last 13 Premier League games )
In last 13 Premier League games that have been played between these two teams, Manchester United have won 10 times while three matches resulted in draw. Aston Villa haven’t won on any of these occasions.
Recent Form Of Both Teams ( In Last 5 Matches )
Aston Villa – D L D L L
Manchester United – D W W W W
Team News
Aston Villa
– Björn Engels is expected to be fit from leg injury by mid July 2020.
– Matthew Robert Targett is expected to recover from hamstring injury by mid-july 2020.
– Tom Heaton will be back in action by late August 2020 as he has not yet fully recovered from knee injury.
– Tyrone Mings is  doubtful for this match.
– Wesley Moraes is expected to be fit from knee injury by late August 2020.
Manchester United
– Axel Tuanzebe is expected to be fit from leg injury by late August 2020.
– Phil Jones is a doubtful for this match with an ankle injury.
– Victor Nilsson Lindelöf is a doubtful for this match with a back injury.
Probable Lineup For Aston Villa
( 4-3-3 )
Pepe Reina ; Neil Taylor, Tyrone Mings, Kortney Hause, Ezri Konsa ; Jack Grealish, Douglas Luiz, John McGinn ; Anwar El Ghazi, Mbwana Samatta, Trezeguet.
Probable Lineup For Manchester United
( 4-2-3-1 )
David de Gea ; Luke Shaw, Harry Maguire, Eric Bailly, Aaron Wan Bissaka ; Nemanja Matic, Paul Pogba ; Marcus Rashford, Bruno Fernandes, Mason Greenwood ; Anthony Martial.
Key Players For Dream11 Fantasy Team Prediction
1. Marcus Rashford – 22 years old English winger has played 26 matches so far in Premier League where he ended up scoring 15 goals and assisted 6 times.
2. Jack Grealish – 24 years old English winger has been pretty consistent for Aston Villa this season. In 30 matches he has scored 7 goals and assisted 6 times.
3. Bruno Fernandes – Portuguese mid fielder has played 9 games for Manchester United in Premier League so far where he ended up scoring 6 goals and assisted 5 times.
4. Aaron Wan Bissaka – English right back has played 30 matches in Premier League so far. He has 73 successful tackles, 52 clearances, 59 interceptions. Apart from this he has also assisted 4 times.
Who Should Be Captain In Aston Villa Vs Manchester United Dream11 Today?
Choosing right captain is always a cause of concern for Dream11 fantasy players. But don’t worry we have eased this task for you. After analysing Bet 365 odds we have selected best choices for captain in this match and the choices are –
1. Bruno Fernandes
2. Anthony Martial
Players You Can Avoid In Grand League
You might have noticed that the team which wins grand league has some big players missing. After analysing Bet 365 odds we have concluded that some players may not find place in dream team so you can avoid them in bigger leagues. Players you can avoid in this match are –
1. Mason Greenwood
2. Marcus Rashford
Aston Villa Vs Manchester United Match Facts
👉 Aston Villa have won just one of their last 42 Premier League matches with Manchester United ( Drawn 11 Lost 30 ).
👉 Manchester United are unbeaten in their last 20 Premier League away games that they have played against Aston Villa ( Won 13 Drawn 7 ).
👉 Manchester United are looking to become the first team in Premier League history to win 4 consecutive matches by a margin of 3+ goals.
👉 Mason Greenwood has scored 15 goals in all competitions for Manchester United this season – the only teenagers to score more goals for Manchester United in a season are George Best in 1965-66, Brian Kidd in 1967-68 and Wayne Rooney in 2004-05 ( The trio scored 17 goals each ).
Aston Villa Vs Manchester United Odds Comparison Case Study
Aston Villa are currently placed at 10.50. If we calculate the winning percentage of Aston Villa at these odds then it comes out to be 9.52 percent.
On the other hand Manchester United are currently placed at 1.35. If we calculate the winning percentage of Manchester United at these odds then it comes out to 74.07 percent. But recent studies shows that when a team is placed at these odds then it actually wins 70 percent of its matches.
Aston Villa Vs Manchester United Dream11 Team For Grand League 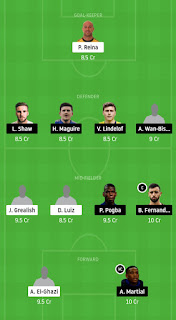