May 17, 2020
Match Preview
Sitting on the verge of relegation Mainz will face FC Koln, placed on 10th position in the points table. FC Koln started their campaign with a disastrous form, but then managed to avoid being relegated before a CO-VID outbreak. As for now they are safe being on 10th position, but it will be Mainz who desperately need three points from this clash to avoid last three spots of the Bundesliga 2019-2020 points table.
Things are in satisfactory position for FC Koln as they have won their last three matches out of their last 5 matches against quality teams like Schalke, Hertha Berlin which will definitely boost their confidence to next level. Talking about Mainz, they have won two out of their last five matches, lost in two and shared points in the remaining one. The only thing which goes in the favour of Mainz is that they have already beaten FC Koln earlier this season with an aggregate of 3-1 which may boost their confidence before they head up for this game.
FC Koln will be hosting Mainz at RheinEnergieStadion and they will be pretty happy as they enjoy great record at their home ground and it will be very difficult for the visitors to beat Koln in their den. In the last five matches played at RheinEnergieStadion , Koln have tasted success on four occasions while they have only lost to table topper Bayern Munich. What will cause worry for Mainz is their away record , they have won just two matches out of the last games played away from their home ground.
Match Details
Venue : RheinEnergieStadion
Date : 17 May 2020
Timings : 7:00 PM ( IST )
League : Bundesliga
Recent Form Of Both Teams
FC Koln – L W W W L W
Mainz – D W L D W L
League Statistics Of FC Koln & Mainz
FC Koln – In ongoing league they have won 10 matches , shared points in two matches and have lost remaining 13 matches . They are currently sitting on 10th position in the points table.
Mainz – Till now they have won 8 matches , shared points in two matches and have suffered defeats in their remaining 15 matches this season so far.
Head To Head Record Between Koln & Mainz in their last 5 meetings
Mainz 3 – 1 FC Koln
FC Koln 5 – 3 Mainz
FC Koln 1 – 1 Mainz
Mainz 1 – 0 FC Koln
FC Koln 2 – 0 Mainz
Playing 11 ( Expected )
FC Koln – Horn, Ehizibue, Bornauw, Leistner, Katterbach, Skhiri, Hector, Kainz, Uth, Jakobs, Cordoba.
Mainz – Müller, St.Juste, Bruma, Niakhate, Baku, Barreiro, Latza, Mwene, Onisiwo, Quaison, Szalai.
Team News
For FC Koln Czichos and Hauptmann will be out of the action as both of these are struggling with the fitness.
For Mainz Mateta is suspended for this match while Zentner has not recovered yet from the knee injury.
Players To Watch Out
1. Robin Quaison : This Swedish player has hardly failed in delivering his best for the club even when the whole team failed. Robin is their highest goal scorer with 12 goals and two assists to his name in this season. Overall he is the fourth highest scorer in ongoing Bundesliga. In his last five games he has scored on four occasions and assisted once. He is Mainz’s lone fighter this season because Mainz has managed to win six games out of 8 when Robin has scored which includes their last victory of 3-1 over FC Koln.
2. Juan Cordoba : Although Cordoba has not lived upto expectations this season but you will be surprised to know that he has scored 8 goals out of 10 at home ground i.e. RheinEnergieStadion which makes him a good choice of captain in Dream11. Apart from this in his last 5 matches Juan Cordoba has scored 4 goals with an assist.
3. Daniel Brosinski : With some great defensive skills Daniel Brosinski will be key in Mainz defense. Not only this he has scored on couple of occasions for his team and even assisted twice being in defense. With speedy wingers in the opponent side , Daniel will definitely be the key player.
4. Ellyes Skhiri : Being a defensive mid fielder Skhiri may not be in the headlines but he has already once and assisted thrice this season so far which makes him a silent assassin for FC Koln.
Match Prediction – As we are talking about Bundesliga so chances of over 2.5 goals is 61% with odds favouring FC Koln.
FC Koln Vs Mainz Dream11 Football Team 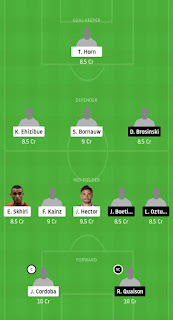 Disclaimer : This team is created before the announcement of lineups so when the lineups are announced do make necessary changes in your Dream11 Team