Manchester City returned to action in fashion as they thrashed Arsenal by 3-0. Raheem Sterling, Phil Foden, Kevin De Bruyne helped city to a seal comfortable victory over The Gunners. Although City was also hurt as David Luiz, who was substituted for injured Pablo Mari was given red card. Watching their game play against Arsenal must have made everyone think that nothing have changed for City over the last 6 months on the field.
This victory over Gunners made The Citizens claim their third victory in their last four games. Their body language looked very sharp despite a three months layoff which is a very good sign for City. Their home form is quite impressive as they are averaging over 2.57 goals per home game this season. Apart from this, Aymeric Laporte has been very crucial for the Blues when it comes to manage clean sheet. Manchester City have kept clean sheets in 75 percent of their games in which Aymeric Laporte has featured in, without him this percentage reduces to 24 percent.
On the other hand Burnley have comfortably managed to avoid relegation with 39 points in 29 matches. They are just one point behind from Arsenal who is currently ranking at 10th position in the points table. Burnley are hurt by the injuries of their key forwards i.e. Ashley Barnes and Chris Wood. The pair have scored half of the total goals for Burnley this season.
As a result of which Burnley have lost five of their last 10 Premier League games and have failed to find the net in five games. Tension increases when it comes to play against Manchester City away from their home. The Clarets won their last away game against City back in 1963. City have scored atleast twice in their last 10 home games with Burnley. Under Guardiola they have won all five home games, scoring 19 goals and conceded just two.
Match Details
Venue – Etihad Stadium, Manchester
Date – 23 June 2020
Timings – 12:30 AM ( IST )
League – Premier League ( Round 30 )
Referee – Andre Marriner
Where To Watch
Hotstar VIP
Star Sport Select 1
Star Sports 1
Star Sports Select HD1
Team News
Manchester City
– Claudio Bravo is expected to recover from his muscle injury by late June 2020.
– Eric Garcia is expected to be fit by Late June 2020 from concussion.
– John Stones is expected to recover by the end June 2020 from his ankle injury.
Burnley
– Key striker Ashley Barnes is expected to be fit by late June 2020.
– Chris Wood is struggling with achilles tendon injury and is sidelined for this game.
– Johann Berg Gundmundson is expected to recover from his calf injury by late June 2020.
Recent Form Of Both Teams
Manchester City – W W W L W
Burnley – D W W D D
Probable Lineup For Manchester City
( 4-3-3 )
Ederson Moraes ; Joao Cancelo, Fernandinho, Aymeric Laporte, Oleksandr Zinchenko ; Kevin De Bruyne, Rodri, Phil Foden ; Bernardo Silva, Sergio Agüero, Raheem Sterling.
Probable Lineup For Burnley
( 4-4-2 )
Nick Pope ; Charlie Taylor, Ben Mee, James Tarkowski, Phil Bardsley ; Dwight McNeil, Jack Cork, Ashley Westwood, Jeff Hendrick ; Matej Vydra, Jay Rodriguez.
Manchester City Vs Burnley Match Facts
👉 Manchester City have won previous four matches against Burnley.
👉 Manchester City have won their all 5 home games against Burnley under Pep Guardiola.
👉 Burnley are winless in 15 league away games to Manchester City.
👉 Manchester City have won seven of their last 8 Premier League games on Monday, managing clean sheets in last four.
👉 Sergio Agüero has scored 9 goals in 9 appearances against Burnley in all competitions.
Who Should Be Captain In Manchester City Vs Burnley Dream11 Today?
Choosing captain is always a head ache for Dream11 fantasy players. But you need not to worry as we have analysed Bet365 odds to bring out best choices for Captain in this match for you. The following best choices are
1. Sergio Agüero
2. David Silva
3. Kevin De Bruyne
Big Players You Can Avoid In Grand League
Here we shortlisted some big Players to whom you can avoid in mega leagues if you are willing to take the risk.
1. Raheem Sterling
2. Matej Vydra
Key Players For Dream11 Prediction
1. Kevin De Bruyne – 28 years old central mid-fielder is one of the most versatile mid fielder in present era. He has appeared in 27 matches for Manchester City where he ended up scoring 9 goals with 16 assists with 1246 accurate passes so far.
2. Sergio Agüero – 32 years old Argentine transforms into goal machine when he faces Burnley. In last 9 games that he played in all competitions against Burnley, has scored atleast once. In 23 Premier League matches so far he has scored 16 goals along with 3 assists.
3. Ashley Westwood – English central mid-fielder has played 26 matches so far for Burnley where he ended up scoring twice and provided assists on five occasions.
Manchester City Vs Burnley Odds Comparison Case Study
Manchester City are currently placed at 1.12. If we calculate the winning percentage of Manchester City with these odds then it comes out to be 89.28 percent.
On the other hand Burnley are currently placed at 19.00. If we calculate the winning percentage of Burnley with these odds then it comes out to be 5.26 percent.
Manchester City Vs Burnley Grand league Team 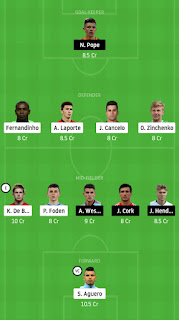