Indian Premier League is up and running successfully, despite missing the fans in stadium, they have a huge TV viewership this year. Within first week of this tournament, we have seen many close matches that were unpredictable. Teams that started this tournament as underdogs have surprised everyone with their gameplay.

Delhi Capitals may not have had much success in the last few seasons but this time they are flying high in the tournament. The very first game of Delhi Capitals ended in a tie where they managed to beat Kings XI Punjab in super over. In their second game, they were against one of the most successful team in the history of IPL i.e. Chennai Super Kings. Carrying a poor record against CSK, many of us may have thought about CSK’s win but Capitals surprised everyone after winning their second straight match in the tournament.

Currently Delhi Capitals have won their both matches and are placed on number one position in the points table. In the 11th game of the tournament, Delhi Capitals will lock their horns against Sunrisers Hyderabad at Sheikh Zayed Stadium.

Delhi Capital’s performance has been contrary to all odds as they have started this tournament on a higher note with back to back wins. Although Capitals don’t have renowned names but their team is a good mixture of young and experienced talents. Players like Prithvi Shaw, Shikhar Dhawan, Shreyas Iyer, Rishabh Pant have played small but vital innings in batting department.

Biggest strength of DC lies in their bowling. Kagiso Rabada has been picking up wickets at an impressive economy rate. Anrich Nortje has been a great inclusion. He may not have picked up wickets in the first match but bagged two crucial wickets in the second. His economy rate has been impressive during death overs. Axar Patel is performing his task in similar fashion during middle overs of the innings.

Overall Delhi’s batting and bowling have clicked all together and this is the main reason they are table toppers currently. DC’s would be high on confidence after beating CSK in last game and Shreyas Iyer will want his team to carry the same momentum in this game as well.

On the other hand, Sunrisers Hyderabad is currently placed on bottom in points table after loosing both of their matches. In initial two matches, everything looked going against Sunrisers Hyderabad. SRH has several issues in their middle order. It seems like Sunrisers are heavily dependent on skipper David Warner, Jonny Bairstow, Manish Pandey in batting department. Apart from these three, no other batsmen showed glimpse to stay at the crease and play with responsibility.

Kane Williamson is surprisingly out from the playing eleven. Mitchell Marsh is sidelined due to injury concern which is hurting team’s balance. Apart from batting, bowlers have failed to perform their job. Bhuvneshwar Kumar went wicketless in both the matches while Rashid Khan has picked up just one wicket in two matches.

Khaleel Ahmed was expensive in last game. Mohammad Nabi was included in last game but his performance cannot be termed as brilliant. Overall, Sunrisers Hyderabad need to resolve their playing eleven issues as soon as possible before it get too late.

Weather Condition – Abu Dhabi will experience hot and humid weather on match day with no chances of rain.

Pitch Condition – It has been low scoring pitch compared to rest of the two among the three in this ongoing season of IPL. Average score on this pitch lies between 160 – 170.

Chasing teams have won two out of three matches played on this ground. Hence we expect, captain who will win the toss is expected to bowl first.

Delhi Capitals is currently placed at 1.80. If we calculate the winning percentage of Delhi Capitals at these odds then it comes out to be 55.55 percent. 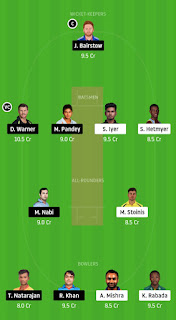