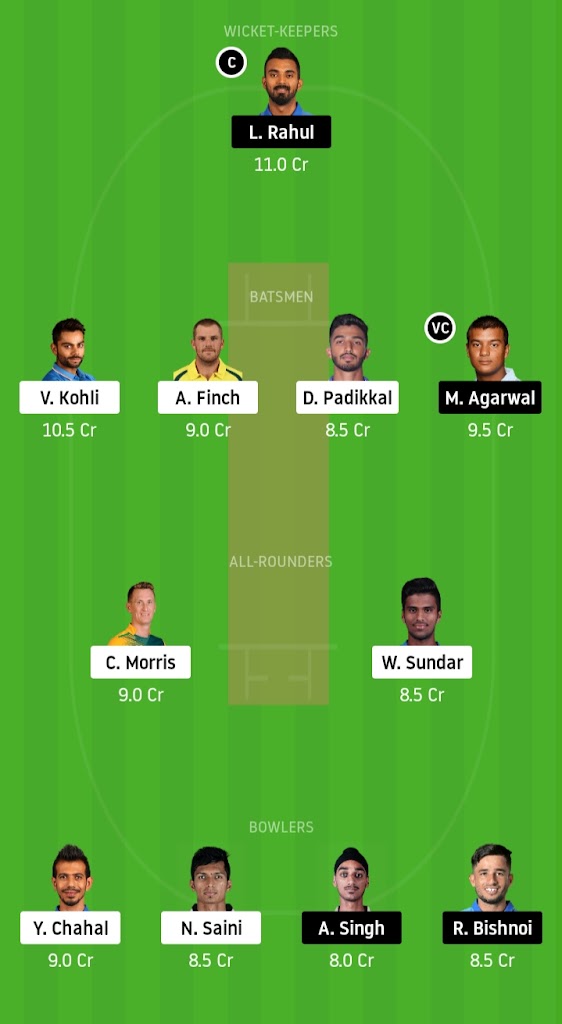 Second half of Indian Premier League has begun and the teams are fighting for their spot in the top four position. Leaving their poor history behind, Royal Challengers Bangalore are having great season this time after winning five of their seven matches so far and are strong candidate for the playoffs. While Kings XI Punjab has been the worst performing team this time as they have just won one of their seven matches and are placed on bottom of the points table.

However Kings XI Punjab’s only victory came against Royal Challengers Bangalore when these two sides met earlier in this season. They will be keen to repeat their heroics in this game as well.

Kings XI Punjab are almost in a do or die situation as they will need to win every of their remaining matches which seems nearly impossible after looking at their current form.

When these two sides met earlier this season, it was Lokesh Rahul who scored heaps of runs. In that game KL Rahul scored 132 runs that came off just 69 deliveries. Although he is among the leading run scorers in this season but Rahul has failed to scored runs at an impressive economy rate to meet T20 standards.

Almost half of the season has already been completed but Kings XI Punjab have failed to find the right team combination. Team is heavily dependent on the likes of KL Rahul and Mayank Agarwal in terms of batting. Their fragile middle order is the biggest worry that has led to team’s poor performance.

However, a five day break would have given the management of KXIP a lot of time to think upon the gaps they need to plug going forward in the tournament. Chris Gayle may feature against RCB ( his former franchise ) at top of the order which will mean that Mayank Agarwal will bat one down. If this happens, KXIP would be in better shape.

KXIP bowlers have done well this season. Inclusion of Arshdeep Singh has provided stability in their bowling unit. In spin department, Ravi Bishnoi has been the find of the tournament as he is bowling terrifically well. Chris Jordan and Mujeeb Ur Rahman conceded 81 runs in 8 overs and one of those could sit out depending upon the nature of pitch.

On the other Royal Challengers Bangalore lost all of their six completed matches last season but now they have turned around everything this season. After the inclusion of Chris Morris in final eleven, RCB is looking lethal. Apart from Morris, the likes of Navdeep Saini, Isuru Udana, Mohammad Siraj have done well in previous matches where they successfully defended their targets.

Virat Kohli and AB de Villiers have made batting much easier as atleast one among them has scored runs in each match. Devdutt Padikkal and Aaron Finch are new opening pair this season and the duo have been pretty consistent at top of the order. While presence of Shivam Dube, Chris Morris, Washington Sundar adds depth in terms of batting as well as bowling.

Overall RCB is better balanced side this year and that has reflected in team’s performance. Going by their form, it wouldn’t be wrong to say that it will take a massive effort for rest of the teams to beat RCB this season.

Weather Condition – It will be another hot and humid day at Sharjah on match day with no chances of rain.

Pitch Condition – Sharjah Cricket Stadium has been a high scoring ground and the pitch will favor batsmen more than the bowlers. Due to shorter boundaries, there is very little margin of errors for the bowler as a mistimed lofted shot even gets converted into maximum. Even though pitch has got slower at Sharjah but still teams batting first have successfully managed to cross 170 run mark.

Although it’s a smaller ground and pitch favor batsmen but the surface has tend to be on slower side especially in second innings of the game and chasing might not be easy. So we expect, captain winning the toss may prefer to bat first.

Best Choices For Captain & Vice Will Be

Royal Challengers Bangalore is currently placed at 1.66. If we calculate the winning percentage of RCB at these odds then it comes out to be 60.24 percent.

On the other hand Kings XI Punjab is currently placed at 2.20. If we calculate the winning percentage of KXIP at these odds then it comes out to be 45.45 percent.