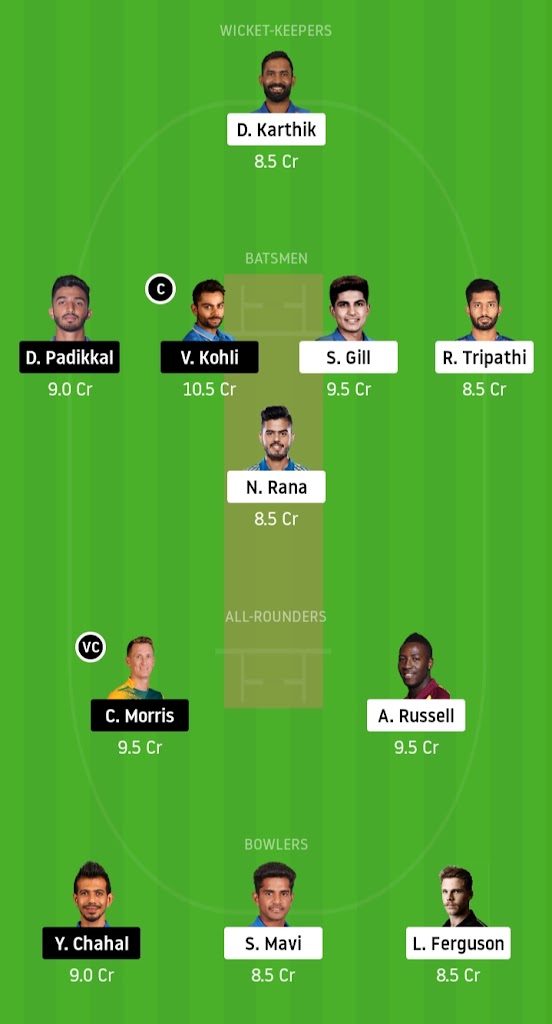 39th match of Indian Premier League 2020 will witness an encounter between Kolkata Knight Riders and Royal Challengers Bangalore. With five wins from 9 matches, KKR is currently placed on 4th position in points table whereas with six wins from 9 matches, RCB is currently placed on third position in points table. It’s an important game for both the sides as the winner of this contest will reach closer to playoffs.

After gaining two crucial points against Sunrisers Hyderabad, KKR is undoubtedly a deserving team to be in playoffs. However they are still in a delicate state where they can afford loosing one or two game but not much of their remaining ones. Before their game against Sunrisers, KKR were relatively struggling with team’s combination.

However against SRH,they included Kiwi pacer Lockie Ferguson and Kuldeep Yadav in order to strengthen their bowling attack. Their net run rate is poor among other teams but that shouldn’t worry team as long as they can win three of their remaining five matches.

Although it wasn’t an easy win over SRH. The game ended in a tie where Kolkata Knight Riders managed to overcome orange army. Lockie Ferguson was the standout bowler who turned KKR’s defensive bowling into an attacking one. Ferguson ended with decent bowling figures of 4-0-15-3. It was Ferguson only who took two wickets in super over by conceding three runs that made KKR’s way easier.

Apart from him Shivam Mavi, Varun Chakravarthy, Pat Cummins were the one who shared one wicket among each other. Kuldeep Yadav went wicketless but he conceded 18 runs in his three overs spell and that should give him confidence.

In terms of batting Shubman Gill, Nitish Rana, Eoin Morgan, Dinesh Karthik made small but valuable contributions. However, poor form of Andre Russel is a matter of concern for KKR. Andre Russel has found it difficult to time the ball this season and in terms of bowling he has conceded lot more runs.

On the other hand, Royal Challengers Bangalore have become a tougher side to beat this season. RCB are coming in this game after a sensational win over Rajasthan Royals in their last game. Two of the most loved cricketers of present era i.e. Virat Kohli and AB de Villiers have performed brilliantly this season. His knock of 55 runs that came off just 22 deliveries has once again proved why he is called Mr 360°.

As compared to last few years, Royal Challengers Bangalore have improved in all three departments of the game. The return of Chris Morris has has made this side pretty much balanced. Apart from Morris, Yuzvendra Chahal, Navdeep Saini, Washington Sundar, Isuru Udana have also done well.

Whereas presence of Virat Kohli, AB de Villiers, Aaron Finch at top of the order makes this team batting lineup very lethal. Apart from these experienced campaigners Devdutt Padikkal has impressed everyone with his consistent batting. Overall it will be difficult for Kolkata Knight Riders to overcome Royals’ challenge.

Weather Condition – Another hot and humid evening in Abu Dhabi is on the cards with no chances of rain interruption.

Pitch Condition – Last match played at this venue resulted in super over where KKR managed to hold on their nerves. However, with larger boundaries and challenging weather condition, batsmen will need to work hard to get runs on the board. Fast bowlers who are pretty consistent with their line and length have done well on this ground whereas spinners will play key role on slow pitch of Sheikh Zayed Stadium.

Best Choices For Captain Will Be –

Kolkata Knight Riders is currently placed at 2.10. If we calculate the winning percentage of KKR at these odds then it comes out to be 47.61 percent.

On the other hand Royal Challengers Bangalore is currently placed at 1.72. If we calculate the winning percentage of RCB at these odds then it comes out to be 58.13 percent. Disclaimer – We have created this team based on our own instincts and analysis. Make necessary changes in your dream11 team once the lineup is announced. Read our preview and try to make your own dream11 team.