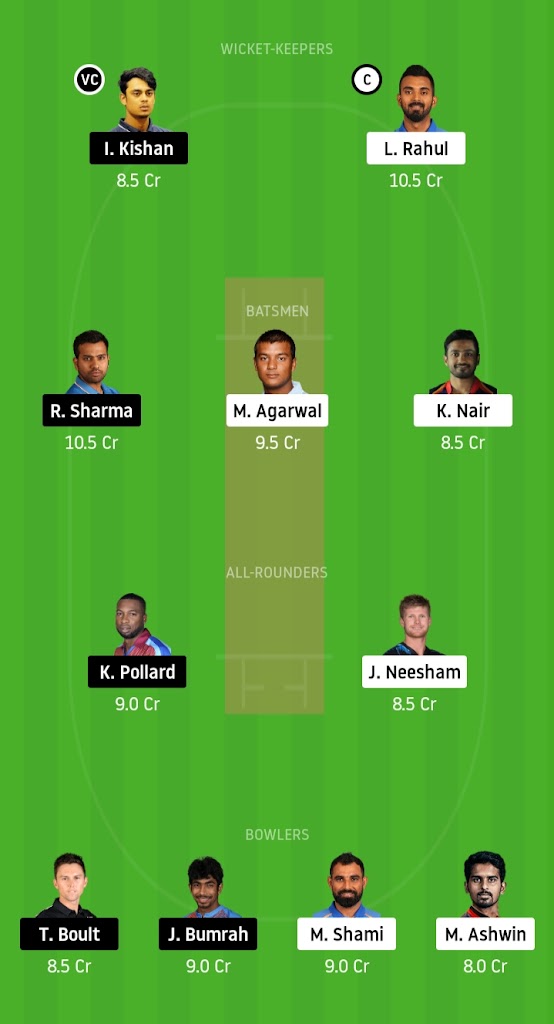 Both – Mumbai Indians and Kings XI Punjab have 2 points from 3 matches and have lost super over contest this season.

Indian Premier League is lighting up cricketing stage with close contests and thrilling finishes in the first 11 matches already. During initial stage of this tournament we have already seen two matches getting decided in super over. In terms of points table, it is hard to predict about those four teams who will qualify for the playoffs. Till now all the teams have the chance to qualify for the playoffs.

In the 13th match of Indian Premier League 2020, Kings XI Punjab will lock their horns against Mumbai Indians.

Both the teams are coming from thrilling close contests where they ended on a wrong side. Mumbai Indians lost to Royal Challengers Bangalore in super over while Kings XI Punjab lost to Rajasthan Royals even after scoring 223/2 in first innings. With one win from 3 matches, Mumbai Indians is currently placed on 6th position, whereas, Kings XI Punjab is placed on 5th position with one win from three games. Due to better run rate, KXIP is ranked higher than Mumbai.

After missing first three matches, universal boss Chris Gayle is available for selection which will further strengthen their batting unit. The Kings have been in fine form in the competition and both of their losses have come by narrow margins. They suffered defeat in super over against Delhi Capitals, while against Rajasthan Royals, they failed to hold to on their nerves at crucial moments.

Talking about Punjab’s bowling, Mohammad Shami is picking up wickets on regular intervals. Sheldon Cottrell went for 30 runs in an over against Rajasthan Royals which resulted in team’s defeat. Murugan Ashwin has played his role with perfection. Ravi Bishnoi is also a kind of talent to watch out for.

On the other hand, before the start of this tournament, Mumbai Indians were favorite to finish in top four in points table but their recent performance doesn’t reflect this. Although, Mumbai Indians is known for its slow starts in IPL history and as the tournament progresses, MI gains the momentum.

Going by the form of their players, Rohit Sharma couldn’t score big in last game when it was needed the most. Quinton de Kock has got pretty good starts but he is unable to convert his starts into a big individual score. Ishan Kishan was included in place of Sourabh Tiwary and the youngster was very unfortunate as he missed his century by just one run. Kieron Pollard is coming down the order and the kind of experience he has under his belt, Mumbai must promote him in batting order.

Pandya brothers are looking out of touch this season. Hardik as well Krunal have given average performances so far and the team will want them to improve in upcoming games. Jasprit Bumrah was incredible with the ball as he kept Mr 360° ( AB de Villiers ) and Virat Kohli quiet during his spell. Trent Boult is doing exactly what he is best at – picking up wickets in during powerplays. Overall both the teams have failed to execute their plans in critical situation during the match and whoever will hold on their nerves during such situations is expected to emerge out as winner.

Pitch Condition – With ample amount of dew in second innings, team haven’t found chasing as easier as they expected to be. The surface has been on a slower side where spinners have enjoyed bowling. Any total of over 170 will be hard to chase on the surface in second innings.

Till now four matches have been played in Abu Dhabi where teams batting first have won twice and teams batting second have also won twice. However chasing big total are not easy on this ground. Hence, team batting first should look to score anything over 170 to build pressure in second innings.

Kings XI Punjab is currently placed at 2.20. If we calculate the winning percentage of Kings XI Punjab at these odds then it comes out to be 45.45 percent.

Mumbai Indians is currently placed at 1.66. If we calculate the winning percentage of Mumbai Indians at these odds then it comes out to be 60.24 percent.