Manchester United will travel to Carrow Road to face Norwich City in the FA Cup quarter final this weekend. To reach this stage, United outclassed Wolves back in January. Anthony Martial’s hat trick against Sheffield United at Old Trafford extended their unbeaten run to thirteen, making them move closer to Chelsea. The Blues then restored their five points advantage over the Red Devils with a 2-1 triumph over Manchester City.
Manchester United are still in race for Champions League spot, so weekend brings perfect opportunity for rotation. With plenty of Premier League matches coming up next weeks, finishing fifth or higher should be club’s top priority. Even if Champions League qualification is their top most priority, Marcus Rashford will be eager to add another FA Cup trophy in club’s collection.
On the hand Norwich City faced their third straight of the Championship against Everton by 1-0. They are now at bottom of the table as The Canaries have not scored in their either match since the league resumption. Aston Villa are placed on 19th position in points table but there is a gap of seven points between both of them which means The Canaries will be on bottom of the table this season.
Norwich City have had dreadful season in the Championship but they have been able to crush top sides in FA Cup to reach this stage. In January, City travelled to Turf Moor – a tough place to get result at but were able to beat Burnley by 2-1. They didn’t stopped at this, then they followed that with a big upset over Tottenham Hotspur. Red Devils will be aware of the fact that they cannot take this game lightly as they don’t want to be the third club to be knocked off by Norwich City.
Match Details
Venue – Carrow Road
Date – 27 June 2020
Timings – 10:00 PM ( IST )
Tournament – FA Cup ( Quarter Final )
Referee – Jonathan Moss
Where To Watch
Sony LIV
SONY TEN 2
SONY TEN 2 HD
Recent Form Of Both Teams
Manchester United – W W W D W
Norwich City – W D L L L
Man Utd Vs Norwich City Head To Head Record
In the last 11 games between these two sides, Manchester United have emerged out as winner on 9 occasions whereas Norwich City could only win twice.
Team News
Norwich City
– Christoph Zimmermann is expected to be fit by early August 2020 from hamstring injury.
– Grant Hanley is expected to recover from hamstring injury by late July 2020.
– Josip Drmic is doubtful for this match.
– Sam Byram is expected to join the training by early August 2020 as he has not fully recovered from hamstring injury.
Manchester United
– Axel Tuanzebe is doubtful for this match.
– Phil Jones is also doubtful for this match.
Probable Lineup For Norwich City
( 4-2-3-1 )
Tim Krul ; Jamal Lewis, Timm Klose, Ben Godfrey, Max Aarons ; Mario Vrancic, Tom Trybull ; Todd Cantwell, Marco Stieperman, Emiliano Buendía ; Teemu Pukki.
Probable Lineup For Manchester United
( 4-2-3-1 )
Sergio Romero ; Brandon Williams, Harry Maguire, Eric Bailly, Diogo Dalot ; Scott McTominay, Fred ; Mason Greenwood, Jesse Lingard, Juan Mata ; Odion Ighalo.
Who Should Be Captain In Manchester United Vs Norwich City Dream11 Today?
Choosing right Captain is always a head ache for Dream11 fantasy players but don’t worry we have eased this task for you. We have analysed Bet365 odds to provide you best choices for Captain so that you can beat your opponents easily and those choices are
1. Anthony Martial
2. Mason Greenwood
3. Odion Jude Ighalo
Players To Avoid In Grand League
After analysing Bet365 odds we have shortlisted the players to whom you can avoid in Grand league or mega leagues. You might have noticed that the team which emerge out as Grand league winner has some big names missing. So here are the names that you can avoid in Grand league
1. Marcus Rashford ( If Anthony Martial doesn’t starts )
2. Teemu Pukki
Manchester United Vs Norwich City Key Players For Dream11 Fantasy Team Prediction
1. Anthony Martial – 24 years old French striker gained headlines after scoring hat trick of goals against Sheffield United at Old Trafford recently in Premier League.H has featured in 3 matches for United in FA Cup so far where he ended up scoring 1 goal along with 2 assists.
2. Juan Mata – The Spaniard has played 3 matches in FA Cup so far where he scored 1 goal along with 135 accurate passes. He will be key player in United’s mid field against The Canaries.
3. Jamal Lewis – The left back will play crucial role in Norwich City’s defense. He has played 3 matches so far in FA Cup and has spent 300 minutes on the field. He has 3 successful tackles, 6 clearances, 2 interceptions to his name.
4. Sergio Romero – He is expected to keep the gloves in the match. The Argentine has played 4 matches for Manchester United in FA Cup so far where he saved 13 shots from the opponents.
Manchester United Vs Norwich City Match Facts
👉 Manchester United have beaten Norwich City by 3-1, 4-0 earlier this season.
👉 Manchester United have scored 2 or more goals in 8 of their last 13 matches.
👉 Manchester United have kept clean sheet in 10 of their last 13 games in all competitions.
👉 Norwich City are winless in their last 7 FA Cup games that they have played on their home ground ( Drawn 3 Lost 4 ).
Man Utd Vs Norwich City Odds Comparison Case Study
Manchester United are currently placed at 1.40. If we calculate the winning percentage of Manchester United at these odds then it comes out to be 71.42 percent.
On the other hand Norwich City are currently placed at 7.50. If we calculate the winning percentage of Norwich City at these odds then it comes out to be 13.33 percent.
Man Utd Vs Norwich City Match Winner Prediction
Our analysis shows that Manchester United is expected to maintain a clean sheet in this game and beat Norwich City by 2-0.
Man Utd Vs Norwich City Grand League Dream11 Team 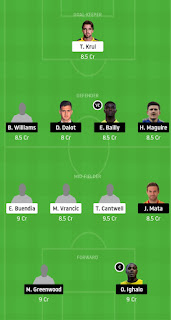 Join our Dream11 Prediction Telegram Channel for Updates – @freeteams4d11
Disclaimer – We have created this team based on our own instincts and analysis. Make necessary changes in your final Dream11 team once the lineup is announced. Read our preview and try to make your own Dream11 team.